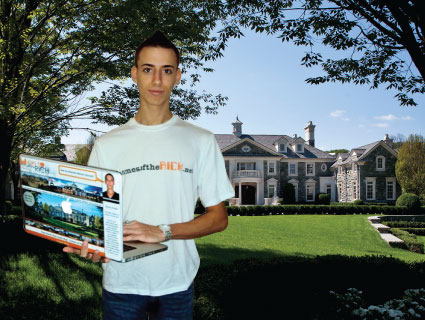 Kenny Forder was 18 and still in high school when he received his first takedown notice. He admits he freaked out a little when the lawyer’s letter arrived at his mother’s home in suburban Morris County, New Jersey, in June 2009. Vahan Gureghian, a wealthy executive active in Pennsylvania Republican politics, wanted Forder to remove the photos of Gureghian’s $13.5 million, 30,652-square-foot, 10-bedroom, French-chateau-style mansion from his blog, Homes of the Rich. (The mansion also has a two-lane bowling alley, a 200-person great hall, and a moat.) Gureghian’s attorney threatened Forder with legal action if he didn’t delete the photos.

Must see: Top 10 Mega-Mansions of the Filthy Rich

Forder, who has a fauxhawk, earrings, and bright hazel eyes, loves Lady Gaga, and shares a duplex with his mom and twin sister, was intimidated enough that he complied. He didn’t give up on his website, though, which has since blossomed into a nearly full-time job.

“I’ve always had a fascination with the wealthy and how they live,” he says, adding that he’s been going to open houses since he was 15. If that seems a bit surprising, so too might his inspiration for the blog. Despite chronicling some astonishing indulgences—15-car garages, lavish indoor spas, 80-foot-long discos, “water sports courts”—Forder doesn’t see his popular site as political, even in the era of Occupy Wall Street. In fact, he dreams of his own abode worthy of the 1 percent.

“I was born to be rich,” Forder says, and he means it. He’s not quite there yet, but his site pulls in about 142,000 visitors and $1,200 in ad revenue each month—more than enough to cover the payments on his 2011 Honda Accord Coupe. He quit the online college he was attending; once his website really takes off, he says, he plans to upgrade: “My next car is going to be a BMW, for sure.” He’d also love to pick up a Cartier or Gucci wristwatch, and eventually a Bentley, like the one driven by his mom’s boss, who owns a chain of car dealerships. In a year or two he’d like to move out of his mom’s place, too.

This summer, Occupy Wall Street protesters may continue to take their message to some of the region’s toniest neighborhoods—the Hamptons, Westchester County, and perhaps even wealthy enclaves in Forder’s corner of North Jersey. If middle-class Americans see how the superwealthy really live, the thinking goes, perhaps they’ll align with the occupiers.

Forder presents a challenge to that strategy, because his reaction to the 1 percent is aspiration, not outrage. “That’s life,” he explains. The rich people he’s met—several have reached out to him after seeing their homes featured on his site—are “all in their 40s and 50s; they’ve been working their whole lives. That’s what happens when you work hard. It’s not like they won the lottery or something, or got money off of something stupid, like Kim Kardashian did. Then people could be pissed at that.”

Forder has a dream house of his own in mind: the Stone Mansion, in the town of Alpine, New Jersey. Recently listed at $56 million, the 30,000-square-foot home of real estate investor Richard Kurtz has “everything you could want”: 12 bedrooms, 14 full bathrooms, indoor basketball court, home theater, wine cellar, bar room (“GORGEOUS,” Forder gushes on his site), and a swimming pool and tennis court, naturally. “It’s just so grand,” he says.

But perhaps also a tad grandiose. “That’s definitely way—” he cuts himself off. “If I became rich, I’d definitely buy a $5 million house or something.”