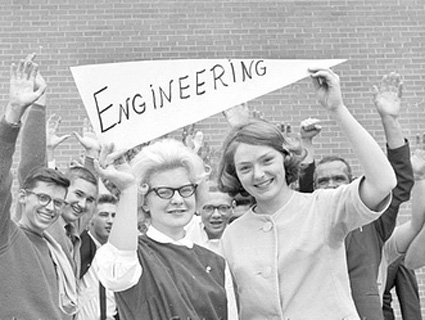 Why don’t women hold more patents? The National Bureau of Economic Research examined the question in a new working paper, and on Thursday, NPR’s Marketplace featured a segment with Freakonomics author Stephen Dubner about the issue.

The radio segment was bothersome. Dubner started by blaming women for there being “room for improvement in the innovation field,” then proceeded to argue that the disparity might be because men are bigger “risk-takers,” and concluded by suggesting that segregating the work force is the best answer. The segment had an overarching tone of, “Geez, womens, would you get your act together? But do it somewhere else, the menfolk are busy.”

Also see our slideshow of 10 weird gems from the US patent and trademark office.

That’s not to say the data in the NBER paper isn’t interesting. The Bureau found that overall, women hold 7.5 percent of all patents, and only 5.5 percent of commercial patents. Men hold the rest. Many people assume that this is because women are less likely to hold degrees in things like engineering or hard sciences, but that only accounts for 7 percent of the massive gap. And simply increasing women’s representation in those fields “would have little effect absent other changes.”

But here’s what both Dubner and the NBER paper missed: women are actually closing the patent gap quite quickly already. The National Women’s Business Council released a report earlier this month that found that women have doubled their share of patents in the last 22 years. Women hold 18 percent of the patents filed since 1990. And in 2010, the number of patents granted to women increased by 35 percent. So I’d say women are actually doing pretty well these days.