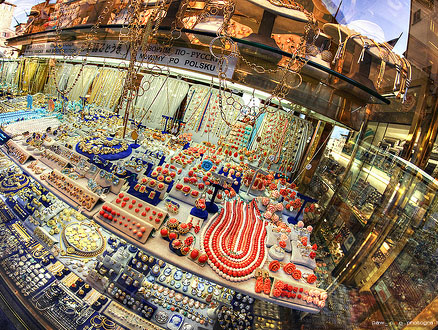 It seems that every year or so, there’s a news story about lead and other nasty substances found in unexpected places—children’s toys, drinking glasses, women’s handbags, lipstick. A new report out Tuesday finds lead in cheap jewelry as well—meaning you might want to back off that faux bling.

The Ann Arbor, Michigan-based Ecology Center found that 57 percent of the 99 pieces of jewelry it test contained high levels of toxic components like lead, cadmium, arsenic, mercury and bromine. Twenty-seven percent of pieces contained more than 300 parts per million (ppm) of lead—which far exceeds the 100 ppm limit for children’s products the Consumer Product Safety Commission set last year. Forty-seven percent contained detectible levels of the “extremely toxic metal” cadmium, which is also a “probable carcinogen” according to the EPA. Thirteen percent had high levels of arsenic, and 5 percent had high levels of mercury.

The Center noted that some of these chemicals are linked to health risks like birth defects, learning disorders, liver toxicity, and cancer, or can cause allergic reactions. Jeff Gearhart, research director at the Ecology Center, called the findings evidence of a “complete failure of our federal chemical regulatory system.” The jewelry they tested came from 14 different stores, including Target, Claire’s, Forever 21, Walmart, H&M, and Hot Topic, and included products intended for both children and adults. Most of the jewelry the group tested cost less than $10.

The report even flags products like a blue, heart-shaped pendant necklace made by the Pastel Collection bought at a store called Glitter that says “Lead Free” on the package—yet the tests found high levels of lead in both the pendant and the necklace’s clasp.

The Consumer Product Safety Commission noted that current law directs the agency to set federal regulations governing lead in children’s jewelry—not for products intended people over the age of 12. Scott Wolfson, director of communications at the CPSC, also noted that as of November 2011, there is a new voluntary industry standard for other chemicals in children’s jewelry that CPSC helped create. He said that the CPSC, “has started looking into the products identified” in the report.