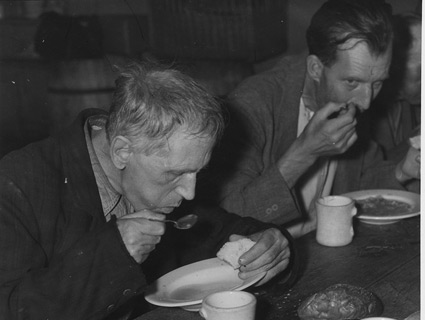 Unemployed men at the Volunteers of America Soup Kitchen in 1936.<a href="http://commons.wikimedia.org/wiki/File:WPA,_unemployed_shown_at_Volunteers_of_America_Soup_Kitchen,_Washington,_D.C._-_NARA_-_195915.tif">Wikimedia Commons</a>

It’s been exactly 50 years since Americans, or at least the non-poor among them, “discovered” poverty, thanks to Michael Harrington’s engaging book The Other America. If this discovery now seems a little overstated, like Columbus’s “discovery” of America, it was because the poor, according to Harrington, were so “hidden” and “invisible” that it took a crusading left-wing journalist to ferret them out.

Harrington’s book jolted a nation that then prided itself on its classlessness and even fretted about the spirit-sapping effects of “too much affluence.” He estimated that one quarter of the population lived in poverty—inner-city blacks, Appalachian whites, farm workers, and elderly Americans among them. We could no longer boast, as President Nixon had done in his “kitchen debate” with Soviet Premier Nikita Khrushchev in Moscow just three years earlier, about the splendors of American capitalism.

At the same time that it delivered its gut punch, The Other America also offered a view of poverty that seemed designed to comfort the already comfortable. The poor were different from the rest of us, it argued, radically different, and not just in the sense that they were deprived, disadvantaged, poorly housed, or poorly fed. They felt different, too, thought differently, and pursued lifestyles characterized by shortsightedness and intemperance. As Harrington wrote, “There is… a language of the poor, a psychology of the poor, a worldview of the poor. To be impoverished is to be an internal alien, to grow up in a culture that is radically different from the one that dominates the society.”

Harrington did such a good job of making the poor seem “other” that when I read his book in 1963, I did not recognize my own forbears and extended family in it. All right, some of them did lead disorderly lives by middle class standards, involving drinking, brawling, and out-of-wedlock babies. But they were also hardworking and in some cases fiercely ambitious—qualities that Harrington seemed to reserve for the economically privileged.

According to him, what distinguished the poor was their unique “culture of poverty,” a concept he borrowed from anthropologist Oscar Lewis, who had derived it from his study of Mexican slum-dwellers. The culture of poverty gave The Other America a trendy academic twist, but it also gave the book a conflicted double message: “We”—the always presumptively affluent readers—needed to find some way to help the poor, but we also needed to understand that there was something wrong with them, something that could not be cured by a straightforward redistribution of wealth. Think of the earnest liberal who encounters a panhandler, is moved to pity by the man’s obvious destitution, but refrains from offering a quarter—since the hobo might, after all, spend the money on booze.

In his defense, Harrington did not mean that poverty was caused by what he called the “twisted” proclivities of the poor. But he certainly opened the floodgates to that interpretation. In 1965, Daniel Patrick Moynihan—a sometime-liberal and one of Harrington’s drinking companions at the famed White Horse Tavern in Greenwich Village—blamed inner-city poverty on what he saw as the shaky structure of the “Negro family,” clearing the way for decades of victim-blaming. A few years after The Moynihan Report, Harvard urbanologist Edward C. Banfield, who was to go on to serve as an advisor to Ronald Reagan, felt free to claim that:

“The lower-class individual lives from moment to moment… Impulse governs his behavior… He is therefore radically improvident: whatever he cannot consume immediately he considers valueless… [He] has a feeble, attenuated sense of self.”

In the “hardest cases,” Banfield opined, the poor might need to be cared for in “semi-institutions… and to accept a certain amount of surveillance and supervision from a semi-social-worker-semi-policeman.”

By the Reagan era, the “culture of poverty” had become a cornerstone of conservative ideology: poverty was caused, not by low wages or a lack of jobs, but by bad attitudes and faulty lifestyles. The poor were dissolute, promiscuous, prone to addiction and crime, unable to “defer gratification,” or possibly even set an alarm clock. The last thing they could be trusted with was money. In fact, Charles Murray argued in his 1984 book Losing Ground, any attempt to help the poor with their material circumstances would only have the unexpected consequence of deepening their depravity.

So it was in a spirit of righteousness and even compassion that Democrats and Republicans joined together to reconfigure social programs to cure, not poverty, but the “culture of poverty.” In 1996, the Clinton administration enacted the “One Strike” rule banning anyone who committed a felony from public housing. A few months later, welfare was replaced by Temporary Assistance to Needy Families (TANF), which in its current form makes cash assistance available only to those who have jobs or are able to participate in government-imposed “workfare.”

In a further nod to “culture of poverty” theory, the original welfare reform bill appropriated $250 million over five years for “chastity training” for poor single mothers. (This bill, it should be pointed out, was signed by Bill Clinton.)

Even today, more than a decade later and four years into a severe economic downturn, as people continue to slide into poverty from the middle classes, the theory maintains its grip. If you’re needy, you must be in need of correction, the assumption goes, so TANF recipients are routinely instructed in how to improve their attitudes and applicants for a growing number of safety-net programs are subjected to drug-testing. Lawmakers in 23 states are considering testing people who apply for such programs as job training, food stamps, public housing, welfare, and home heating assistance. And on the theory that the poor are likely to harbor criminal tendencies, applicants for safety net programs are increasingly subjected to finger-printing and computerized searches for outstanding warrants.

Unemployment, with its ample opportunities for slacking off, is another obviously suspect condition, and last year 12 states considered requiring pee tests as a condition for receiving unemployment benefits. Both Mitt Romney and Newt Gingrich have suggested drug testing as a condition for all government benefits, presumably including Social Security. If granny insists on handling her arthritis with marijuana, she may have to starve.

What would Michael Harrington make of the current uses of the “culture of poverty” theory he did so much to popularize? I worked with him in the 1980s, when we were co-chairs of Democratic Socialists of America, and I suspect he’d have the decency to be chagrined, if not mortified. In all the discussions and debates I had with him, he never said a disparaging word about the down-and-out or, for that matter, uttered the phrase “the culture of poverty.” Maurice Isserman, Harrington’s biographer, told me that he’d probably latched onto it in the first place only because “he didn’t want to come off in the book sounding like a stereotypical Marxist agitator stuck-in-the-thirties.”

The ruse—if you could call it that—worked. Michael Harrington wasn’t red-baited into obscurity. In fact, his book became a bestseller and an inspiration for President Lyndon Johnson’s War on Poverty. But he had fatally botched the “discovery” of poverty. What affluent Americans found in his book, and in all the crude conservative diatribes that followed it, was not the poor, but a flattering new way to think about themselves—disciplined, law-abiding, sober, and focused. In other words, not poor.

Fifty years later, a new discovery of poverty is long overdue. This time, we’ll have to take account not only of stereotypical Skid Row residents and Appalachians, but of foreclosed-upon suburbanites, laid-off tech workers, and America’s ever-growing army of the “working poor.” And if we look closely enough, we’ll have to conclude that poverty is not, after all, a cultural aberration or a character flaw. Poverty is a shortage of money.

Barbara Ehrenreich, a TomDispatch regular, is the author of Nickel and Dimed: On (Not) Getting By in America (now in a 10th anniversary edition with anew afterword). This is a joint TomDispatch/Nation article and appears in print at the Nation magazine. Follow TomDispatch on Twitter @TomDispatch and join us on Facebook. To stay on top of important articles like these, sign up to receive the latest updates from TomDispatch.com here.