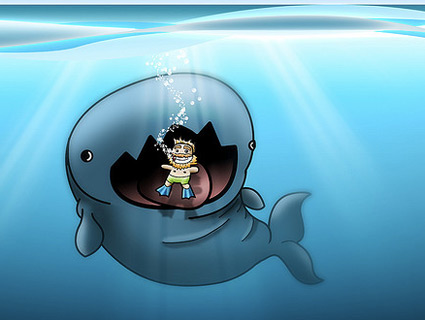 Did whales benefit from the 9/11 terrorist attacks? Turns out that question isn’t as boneheaded as it sounds.

In July 2001, scientists from the New England Aquarium began a study of right whales in the Bay of Fundy in the Gulf of Maine, testing whale excrement for “hormone-related chemicals” that indicated the animals’ stress levels. And when the September 11 attacks happened, a window of opportunity was suddenly open for examining whether sound pollution was a major cause of stress for these whales.

AFP has the story:

The steady drone of motors along busy commercial shipping lanes not only alters whale behaviour but can affect the giant sea mammals physically by causing chronic stress, a study published Wednesday has reported for the first time.

The findings were made possible, researchers said, by an event that at first glance seems far removed from the plight of cetaceans: the attacks on New York’s Twin Towers on September 11, 2001. Only a catastrophe of that magnitude, they explained, could have caused maritime traffic to suddenly drop off, making it possible to measure the impact of varying levels of sound pollution in the sea.

Over the last 50 years noise caused by cargo and military vessels, along with high-decibel sonars used for oil exploration, has gradually increased in intensity and scope. Baleen whales communicate at the same low-frequency wavelengths emitted by these ships, in the range of 20 to 200 hertz (Hz), and some species have adapted by emitting louder and more frequent acoustic signals.