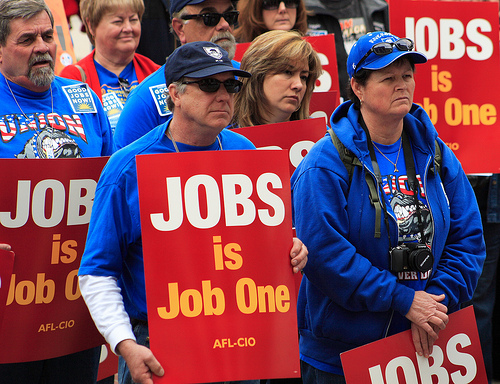 Mitt Romney never misses a chance to hammer President Obama for supposedly tanking the US economy. He accuses Obama of heaping on job-killing regulations and jacking up taxes on businesses large and small. “Obama’s economic failure,” the Romney campaign calls it.

But Romney will need some fancy rhetorical footwork to spin away the jobs numbers released by the Bureau of Labor Statistics on Friday, which offer arguably the most optimistic snapshot of the American job market seen in four or five years.

The headline unemployment rate dropped for the third month in a row, to 8.3 percent. The private sector created 257,000 jobs, and although the government sector lost 14,000 jobs, that still meant a net gain of 243,000 jobs overall. To boot, the number of jobs added in December was revised up. The BLS now believes the economy added 203,000 jobs in December, 3,000 more than initially thought. November’s jobs numbers were revised upwards, too, to 157,000—57,000 higher than the previous estimate. That means job market growth was stronger in those months than originally thought, and the recovery continues to gain momentum.

Not all the news was rosy. Long-term unemployment—those out of work for six months or more—held steady at 5.5 million people, or 43 percent of the unemployed. And the overall unemployment rate, including the underemployed and those who’ve stopped looking for work, dipped by just a tenth of a percentage point, to 15.1 percent.

Still, the reaction to the jobs numbers was cheery all around. Moody’s Analytics economist Mark Zandi said, “This is unambiguous. Everything is good.” Financial blogger Felix Salmon called January’s report “positively glowing.”

In other words, Friday’s numbers are not just good news for American workers but especially for Obama and his re-election chances. Mitt Romney has his work cut out for him trying to explain away these numbers.