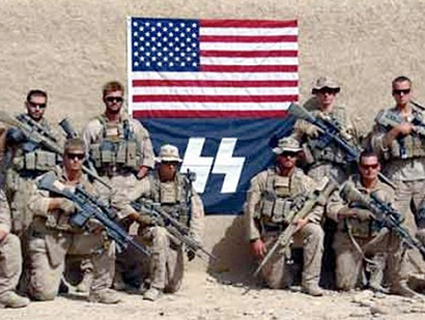 When Marine investigators learned last November that a scout sniper platoon in Afghanistan was using a Nazi SS flag as its standard, it wasn’t a member of the unit who told them. It was Iraq war veteran Waitman Beorn, a visiting history professor at Loyola University New Orleans, also a Fulbright and Guggenheim fellowship recipient who teaches at the National Holocaust Memorial Museum in Washington. Dr. Beorn’s research on Nazis and genocide is informed by his military background: He is a West Point graduate and former officer who served as a scout platoon leader in Iraq from 2003-04. Through his work he seeks to teach “ethical decision-making in a military context using the Holocaust as a vehicle.”

Shortly after I first wrote about the flag controversy last week, Beorn got in touch to explain how and why he chose to report the incident to the Marine Corps’ inspector general. (Though Beorn contacted military authorities, he didn’t play a part in the incident’s recent unearthing by the media.) For one, he had learned through military contacts that the use of the SS flag was not an isolated incident. He hoped that exposing it could lead to an important “teachable moment” that might help alleviate what he considers to be a serious issue. In an email interview, he shared with Mother Jones details of how the Marine Corps responded to him and how the Corps has since addressed this moral education issue with the troops. He said he was disappointed with the emerging media narrative that the military had responded poorly. “I was surprised by the speed with which they acted and the seriousness with which they appeared to take it,” he wrote.

But he also emphasized: “I think our public needs to realize that this is not a case of the ‘liberal media’ going after our brave men and women in uniform. Symbols are important. They send messages. These messages are important.” He explained his special interest in the SS incident with regard to military training, and what he thought would be the appropriate punishment for the service members in question—especially during wartime. In a follow-up email he wrote: “My focus is on the importance of positive unit cultures, and that the use of this image highlights a problem. For example, I was just informed that a Marine posted on a blog that he had had the tattoo for 17 years, which seems to highlight this point for me.”

The following email exchange has been lightly edited for clarity.

Mother Jones: How were you made aware of the photos?

Waitman Beorn: A colleague of mine received it from a friend associated with the Marines. It was forwarded to me via email with a bit of background.

MJ: What were your thoughts on them, both as an academic specialist in Holocaust studies and as a former scout platoon leader?

“When a unit orders, condones, or allows dysfunctional behavior in the small things, this can metastasize into much larger violence, including war crimes.”

WB: I was disappointed and saddened. Our military’s image has been sullied of late and it was really disturbing for me to see that certain members were choosing the SS (which is in my mind the epitome of evil) as something to admire, at least its imagery. My work, as you may have noted from my CV on my website, focuses on the German military in the Holocaust, and this was particularly disturbing in that context.

As a former officer, my first thought was: Where were the NCOs/officers? This didn’t seem to be taking place on a remote patrol somewhere. I have since learned that the use of SS runes is not an isolated phenomenon. Even if the Marines themselves didn’t know what the runes meant (which I can’t really believe), someone did and allowed it to happen. (Note: you can find that exact flag online with the description: “7180. ss double runic flag, a favorite and well know [sic] ss flag, 3′ x 5′ $7.50” It is displayed on a page literally surrounded by Nazi memorabilia.) What this tells me is that those in command didn’t consider this to have been a concerning issue. That is what troubled me.

I was in the cavalry…We were perhaps not an elite unit, but we had a proud tradition and considered ourselves elite, at least in the armor community. We wore Stetsons and spurs. So I understand the importance of symbols to unit cohesion and culture. This, perhaps, made the choice of the SS runes all the more troubling.

MJ: What did you expect or hope would happen when you contacted the Marines’ inspector general?

WB: First, I wanted to them aware of the situation. I contacted the inspector general because they are the ones most likely to deal with the situation.

MJ: How did things proceed from there?

WB: I was quite pleased with the response I got from the [colonel in charge of the First Marine Expeditionary Force’s investigative office]. He seemed to be taking this very seriously and searching for those involved, as well as in educating the other scout snipers about the inappropriateness of this.  I thought that using the incident as the basis for a class in the 1st Marine Division was an excellent response. I do want to highlight the response of the IG here. I was surprised by the speed with which they acted and the seriousness with which they appeared to take it.

The only part of the Marine Corps response that is a little troubling is the automatic assumption that these Marines had no idea what symbol they were appropriating. For example, from CNN: “They determined that the Marines in the photo were ignorant of the connection of this symbol to the Holocaust and monumental atrocities associated with Nazi Germany.” I have a hard time believing that. One or two Marines, okay. But all of them, including their leadership? Also, the comment by the spokeswoman that they couldn’t have known because that’s not what Marines are about seems hard to believe, as does the revelation that this is NOT an isolated incident.

MJ: Amid all the media hubbub, what do you hope is the upshot of this, culturally?

WB: I think this is a highly teachable moment about the creation and maintenance of positive unit cultures and environments. This is exactly the kinds of discussions we have with cadets at the USHMM using, not coincidentally, the German army in the Holocaust as a teaching example of how negative command climates and unit cultures lead to atrocity. The idea, in a nutshell, is that when a unit orders, condones, or allows dysfunctional behavior (particularly racist, overly brutal, etc.) in the small things, this can metastasize into much larger violence including war crimes. See the Army “kill team” in Afghanistan.

Moreover, I think our public needs to realize that this is not a case of the “liberal media” going after our brave men and women in uniform. Symbols are important. They send messages. These messages are important. It doesn’t matter what the intent behind the use of the symbols was or what the snipers intended them to stand for. Some symbols simply have pretty solid meanings. For example, the swastika was not always a Nazi symbol, sadly. But no one would look at its use now and assume it was a reference to ancient India and that it was unfair to criticize whoever was using it. As a historian, of course, I would say this is another reason that knowing the historical provenance of images and ideas is important.

“As for the higher-ups, the senior NCOs and officers involved, the standard of punishment must be higher.”

MJ: Any thoughts on an appropriate action to take with respect to the platoon with the flag? Or more broadly, what should be added to every servicemember’s training and development?

WB: It appears to me that there are two extreme positions being taken. One seems to call for heads to roll (i.e. calling this a “felony”). The other seems to argue that these men are in combat and should not be punished because of the rough conditions they are in and that this is a tempest in a teacup. The latter position takes at face value that they had no idea of the provenance of the symbols which, as I said, I find incredibly hard to believe.

As far as appropriate action, certainly this depends on facts of the case not available to me. I think the education aspect is incredibly important. Not just about the racist symbols themselves, but about the choice of unit mascots, symbols, etc. Particularly given the complex battlefield in Afghanistan and the necessity to gain the support of the local population. The actions of the lowest-ranking servicepeople in this global environment can have huge strategic importance (Abu Ghraib, kill team, urination incident).

And this does not mean that being sensitive to this is an attempt at being overly PC or touchy feely. One of the reasons we don’t execute prisoners, for example, beyond the more important reasons of morality and the law of war, is that such behavior makes the enemy fight harder, causes higher casualties for us, and makes the mission harder.

That being said, do the lower-ranking Marines need to be court-martialed? Probably not. Are there nonjudicial punishments and remedial training that would be appropriate? I think so. As for the higher-ups, the senior NCOs and officers involved, the standard must be higher. These are the ones who create positive (and negative) climates.

Again, do they need to be in prison? No, especially given the other incidents of late which ARE of more severity. Do they need to be made an example of? Probably, depending on their level of knowledge. Can this be career ending (i.e. letter of reprimand)? I think so. But again, I think it depends on the facts of the case. I do think the Corps needs to go further than simply saying that no one had any idea what the runes meant (particularly if this has been a longer term issue that has never been brought up). They need to make more details public.