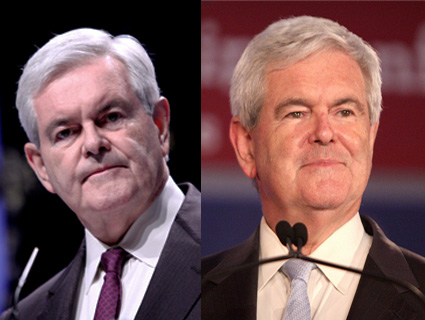 Nine months ago, Newt Gingrich appeared before the Alzheimer’s Association Advocacy Forum and delivered an inspiring keynote address. The hundreds in the audience, who were prepping to lobby Congress for funding for Alzheimer’s research and care, were largely Democrats, and many were initially skeptical about a speech from the leader of the Republican Revolution of 1994. But throughout Gingrich’s address, the crowd applauded roundly, as Gingrich proposed ideas for reaching breakthroughs in the care and treatment of Alzheimer’s. He urged taking “all brain science off-budget,” devoting as much federal funding as scientists could absorb to Alzheimer’s research, and underwriting this massive effort with “Alzheimer’s bonds.” An immediate goal, he noted, was to find methods that would postpone the onset of Alzheimer’s by five years—which in and of itself would cut the long-term cost of Alzheimer’s from $20 trillion to $10 trillion.

Gingrich wowed the audience as he called for a “healthy conversation with no partisanship.” A subsequent video of the talk opens with a praiseful introduction from former Democratic Sen. Bob Kerrey, who hails the former House speaker as “enormously intelligent, enormously innovative.” This was Gingrich at his best: thinking big thoughts about a big problem and deriving big policy. And he was doing so as a Washington insider who had co-chaired with Kerrey a blue-ribbon committee on Alzheimer’s that included members of the various elites Gingrich now routinely assails on the presidential campaign trail.

For years, Gingrich has led a double life. There’s the bad Newt who has counseled his fellow Republicans to call Democrats immoral traitors who betray the nation, who has railed against gay-rights-loving secular socialists hell-bent on controlling and ruining the United States, and who has used racially coded language to assail Barack Obama as a “food stamp president” who can only be understood as someone with a Kenyan anti-colonialist mindset. Then there’s the other Newt, who does seem to care about real problems confronting the nation and who genuinely wants to collaborate with experts (and even Democrats!) to reach non-partisan solutions. (Google “couch, Gingrich, Pelosi.”)

Think of a gothic novel: Dr. Gingrich and Mr. Newt. And Gingrich’s work on Alzheimer’s is a perfect illustration of how these two parts of his being are at war with each other.

Democrats, Gingrich says, yearn to impose on the nation a “secular-socialist machine,” which “represents as great a threat to America as Nazi Germany or the Soviet Union once did.” Gay rights advocates, he adds, are striving to establish a “gay and secular fascism.” He now routinely rails against “the elites”—those in Washington, those living in Manhattan high-rises, those on Wall Street, those working in the media, those wearing judicial robes. As he put it in 2006, “the voice of the overwhelming majority of Americans is rejected by a media-academic-legal elite.”

Yet his work on Alzheimer’s shows that when he is not hurling overheated rhetoric at the elites, Gingrich—who has pocketed money advising Freddie Mac—is not reluctant to cooperate (and play nice) with members of these various nation-destroying cliques to advance policy.

In 2007, the Alzheimer’s Study Group was created under the auspices of the Congressional Task Force on Alzheimer’s Disease, with Gingrich and Kerrey as the co-chairmen, to draft a strategic plan to overcome the nation’s mounting Alzheimer’s crisis. Members of this commission included the sort of people Gingrich has so often railed against in the abstract:

A gay rights promoter, a K-Streeter, an Obama-ist, a Wall Streeter, and…Harvard—these people represent the forces that Gingrich says are destroying (literally) the nation.

Yet when Mr. Newt was not tossing out the red meat, Dr. Gingrich—he’s a historian, you know—was delighted to pull together with these elitists. Together, they and other members of the commission (such as former Supreme Court Justice Sandra Day O’Connor, former Food and Drug Administration chief Mark McClellan, and Dr. Christine Cassel, the president of the American Board of Internal Medicine) developed a strategic plan in 2009 that called for a federal government-backed “bold-project to contain the staggering impact of Alzheimer’s disease” and to increase and reconfigure Medicare payments covering the care of dementia patients. The report was a forward-looking document, calling for a massive government project (with a public-private partnership)—sort of a winning-the-future idea that Obama might fancy. In fact, in early 2011, Obama signed into law the bipartisan-backed National Alzheimer’s Project Act, which was based in part on the Gingrich-Kerrey group’s report and would create a coordinated national plan to address the Alzheimer’s crisis.

The Alzheimer’s commission and subsequent legislation was a model for how policy should function. Bring together accomplished experts, focus on an immense challenge, put aside partisan squabbling, and assemble recommendations that become the basis of bipartisan legislation. Not all issues, of course, can be handled in such an enlightened fashion. (See tax cuts.) But in this instance Gingrich was part of an endeavor that succeeded. “Here was Newt at his best,” says one participant.

But Gingrich’s involvement with the Alzheimer’s project underscores his own profound erraticism. He too easily shifts from serious and sober scientific-based policy work to say-anything, falsehood-fueled political bomb-throwing. On the campaign trail, he tries to show his policy visionary side—though it doesn’t always work out. (Lunar colonies for all!) But much of that is drowned out by his extreme rhetoric and nastiness, as he whines about being falsely accused by his foes while simultaneously flinging his own fibs.

Gingrich does have the capacity to be a respected policy statesman—one of the elites!—which clearly is one of his aims. But he cannot resist being the flame-throwing bad boy of American politics. And it’s tough to be both. Jekyll was a philanthropist who couldn’t say no to his uncivilized urges. And Gingrich has been as unsuccessful as the Victorian-age doctor in controlling his darker impulses. His inability to resolve such a fundamental internal conflict may well be his biggest obstacle to becoming president.