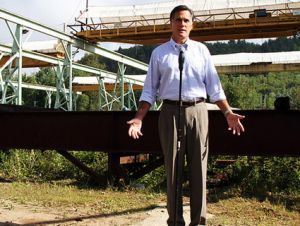 When moderator George Stephanopolous asked Mitt Romney about his views on contraception at Saturday’s debate, the GOP front-runner acted as if he’d just been asked about chupacabras or spaceships—ignoring his own stated positions on the state efforts to limit access to (and ban outright) some forms of contraception.

Stephanopolous’ question was simple: “Governor Romney, do you believe that states have the right to ban contraception? Or is that trumped by a constitutional right to privacy?” Here was Mitt’s answer:

George, this is an unusual topic that you’re raising. States have a right to ban contraception? I can’t imagine a state banning contraception. I can’t imagine the circumstances where a state would want to do so., and if I were a governor of a state or…or a—or a legislature of a state—I would totally and completely oppose any effort to ban contraception. So you’re asking—given the fact that there’s no state that wants to do so, and I don’t know of any candidate that wants to do so, you’re asking could it constitutionally be done? We can ask our constitutionalist here.

At this point, Romney turned to Rep. Ron Paul, a self-described “constitutionalist,” and the crowd laughed. But it was a serious question, given that in 2007 Romney supported a federal personhood amendment that would have defined life as beginning at fertilization, and in 2011, he did his best to avoid saying definitively whether he opposed Mississippi’s “personhood amendment,” which would have made all forms of hormonal contraception illegal. (My colleague Kate Sheppard has explained the issue quite clearly.) In other words, state and federal lawmakers are very much trying to ban contraception.

After some crosstalk, Romney started up his answer again, and was insistent. “George, I—I don’t know whether a state has a right to ban contraception. No state wants to. I mean, the idea of you putting forward things that states might want to do that no—no state wants to do and asking me whether they could do it or not is kind of a silly thing, I think.” When Santorum again pressed him, Romney was incredulous, “Has the Supreme Court—has the Supreme Court decided that states do not have the right to provide contraception?”

No—they decided the opposite in Griswold v. Connecticut, ruling that the right to privacy prohibited states from banning contraception. But it’s a sore point with conservatives, like Rick Santorum, who believe the right to privacy is a load of a baloney. And in light of the nationwide Personhood movement, it’s hardly a dead issue.