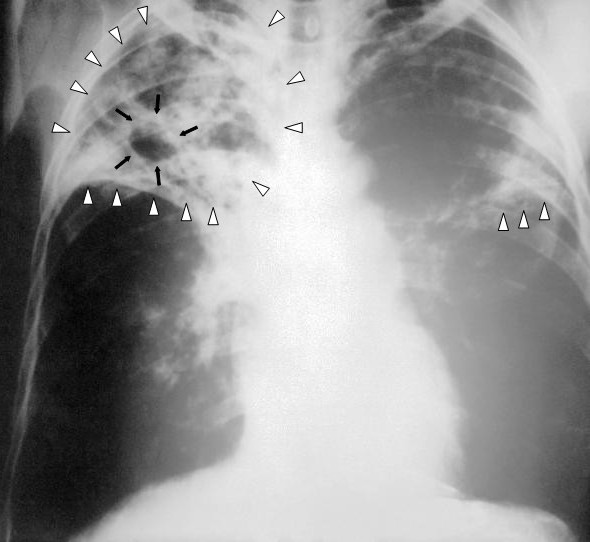 X-ray of a patient with advanced pulmonary tuberculosis.Credit: Centers for Disease Control via <a href="http://commons.wikimedia.org/wiki/File:Tuberculosis-x-ray-1.jpg">Wikimedia Commons</a>.

At least 12 patients in Mumbai, India, have been infected with a totally drug-resistant form of tuberculosis. One has died.

The Times of India reported on Saturday:

Tuberculosis, which kills around 1,000 people a day in India, has acquired a deadlier edge. A new entity-ominously called Totally Drug-Resistant TB (TDR-TB )-has been isolated in the fluid samples of 12 TB patients in the past three months alone at Hinduja Hospital at Mahim [in Mumbai]. The hospital’s laboratory has been certified by the World Health Organization (WHO) to test TB patients for drug resistance. While Iran first reported TDR-TB cases three years ago, India seems to be only the second country to report this deadly form of the disease. TDR-TB is the result of the latest mutation of the bacilli after Multi-Drug-Resistant TB (MDR-TB ) and Extremely Drug-Resistant TB (XDR-TB ) were diagnosed earlier.

The Hindustan Times reports the new strain as:

[A] condition in which patients do not respond to any TB medication… The mortality rate for this strain of the infectious disease is 100%… The patients, including a 13-year-old girl were diagnosed in October. A 31-year-old woman from Dharavi died in November… Doctors treating these patients say the absolute resistance is a result of the patients being prescribed wrong antibiotics by unspecialised doctors.

Maryn McKenna at Wired writes that the news from India was first was published in a little-noticed letter to Clinical Infectious Diseases (CID) last month, and notes:

TB is already one of the world’s worth killers, up there with malaria and HIV/AIDS, accounting for 9.4 million cases and 1.7 million deaths in 2009… At the best of times, TB treatment is difficult, requiring at least 6 months of pill combinations that have unpleasant side effects and must be taken long after the patient begins to feel well. Because of the mismatch between treatment and symptoms, people often don’t take their full course of drugs.

The CID letter reports inadequate care provided to four of the 12 Indian patients, who saw as many as four different doctors, and at least three received partial, multiple courses of the wrong antibiotics:

Worryingly, the first emergence of totally drug-resistant TB seen in 15 patients in Iran in 2009 included Afghani, Azerbaijani, and Iraqi immigrants, writes McKenna. Many health workers at the time assumed the total number of cases was higher than diagnosed, since there was (and is) little in the way of even basic medical care in those border areas.

Worldwide, only two-thirds of countries with resistant TB have the labs to diagnose those strains, with only 10 percent of multi-drug-resistant TB patients receiving treatment, at cure rates as low as 25 percent. There’s no cure for totally drug-resistant TB.

Few hospitals in India can test for resistant TB and cases there might be more prevalent as well.