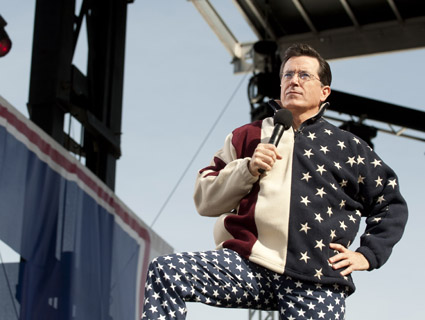 “God bless you all! And God bless Citizens United!”

So roared a beaming Stephen Colbert, arms spread wide, on his show a week ago. He’d just handed over control of his super-PAC to his Comedy Central colleague Jon Stewart—just in time to unveil an exploratory committee to run for “president of the United States of South Carolina.” Colbert, of course, won’t succeed in his comical presidential bid. But the latest stunt in his long-running super-PAC gag intentionally laid bare what campaign-finance advocate Fred Wertheimer calls “the campaign finance scandal of the 2012 elections.”

In the wake of the Supreme Court’s Citizens United decision nearly two years ago, super-PACs can raise and spend unlimited sums of money to support or attack candidates, but with one catch: They can’t coordinate with the candidates they’re backing. In other words, Colbert can’t tell Stewart how to run the pro-Colbert super-PAC. But is Stewart really running the PAC independently of his friend and coworker? Who knows, and besides, the rule is virtually impossible to enforce. To rub in the ridiculousness, Stewart said he’d rename his new super-PAC “The Definitely Not Coordinating With Stephen Colbert Super-PAC.” Hyuk, hyuk.

Real presidential super-PACs appear to be in on the joke. Below, 10 super-PACs run by operatives with remarkably close ties to the candidates they’re “independently” supporting: