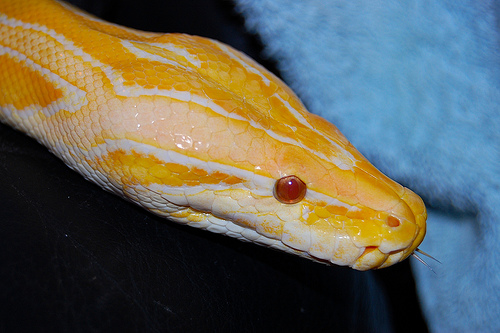 Several weeks ago, the Obama administration announced that it has finalized a new regulation prohibiting the interstate transport of several varieties of giant snake, some of which can grow up to 18 feet long. Such massive snakes have wreaked havoc on sensitive ecosystems, as a new paper published in the Proceedings of the National Academy of Sciences confirms.

The researchers, led by Davidson College biologist Michael E. Dorcas, report that surveys around Everglades National Park discovered a 99.3 percent decrease in the number of raccoons observed between 2003 and 2011. The number of opossums observed was down 98.9 percent, and the number of bobcats declined 87.5 percent. Where did these animals go? Into the bellies of giant, hungry pythons. The researchers conclude:

These findings suggest that predation by pythons has resulted in dramatic declines in mammals within ENP and that introduced apex predators, such as giant constrictors, can exert significant top-down pressure on prey populations. Severe declines in easily observed and/or common mammals, such as raccoons and bobcats, bode poorly for species of conservation concern, which often are more difficult to sample and occur at lower densities.

See the Washington Post, National Geographic, and NPR for more.

And while we’re on the subject, here’s a video of a python who tried to eat an alligator but exploded.