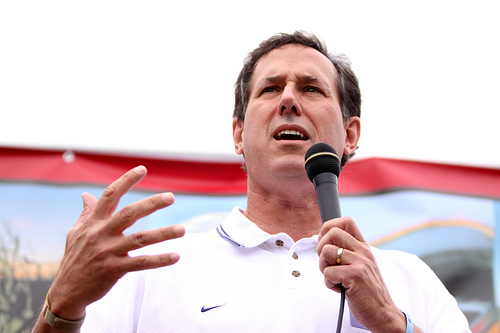 The klieg-lit ballroom inside Manchester’s Derryfield restaurant is where Rick Santorum’s unexpected surge coughed, sputtered, and stalled. Munching on chicken fingers, making small talk, and checking email on iPhones and Blackberries, reporters appeared to outnumber Santorum supporters at the candidate’s primary party. This was where the reality of Santorum’s spare, insurgent campaign overtook the media hype surrounding it.

The Santorum campaign had zeroed in on Iowa, where the candidate methodically hit all 99 counties, a strategy that paid off when the former Pennsylvania senator claimed the second slot—and the media spoils that accompanied it—in the state’s GOP caucuses. But his focus on Iowa left Santorum with little beyond media momentum to carry him into New Hampshire, where he didn’t have much of an infrastructure to speak of. (Though his campaign manager, Mike Biundo, does hail from the Granite State.)

Despite this disadvantage, the Santorum team ran a dogged campaign in the week leading up to the primary, stacking the candidate’s schedule with town halls and meet-and-greets. But his social conservative message, which found a small but diehard base of support here, didn’t really penetrate—at least not in the way the Santorum campaign needed it to in order to pose a real threat to Mitt Romney’s slick, cash-flush operation. (The contrast between the two campaigns couldn’t have been more stark. At Santorum’s events, it was a crapshoot whether the candidate would even have a working mic; Romney’s appearances were meticulously choreographed, resembling a presidential—not a primary—campaign.)

Before Santorum’s Iowa near-victory, the former Pennsylvania senator was polling in the single digits in New Hampshire. Afterward, one poll briefly had him at 21 percent. In the state’s primary, he ended up placing fifth, slightly behind Newt Gingrich, with less than 10 percent of the vote. The campaign’s goal had been to score in the double digits and possibly overtake Gingrich, but it was ultimately unable to achieve either.

Taking the stage at the restaurant flanked by his wife Karen and two of his seven children, Santorum—appearing a tad dejected—spun his back-of-the-pack finish as a victory. The fact that he competed at all, Santorum suggested, was a win. “We wanted to respect the process here,” he told supporters, to cheers of “We pick Rick!”

He added: “We came where the campaign was and we delivered a message not just for New Hampshire but for America—that we have a campaign that has a message and a messenger.”