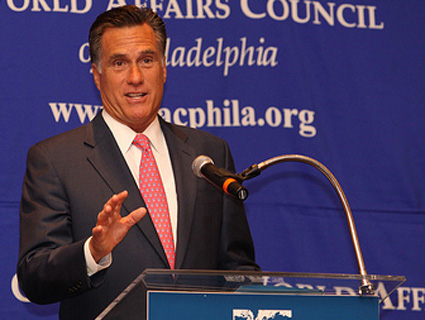 Mitt Romney found himself defending his record on health care reform in Massachusetts during Thursday night’s debate, as former Pennsylvania Senator Rick Santorum hammered the GOP front-runner for putting in place a “government-run health care system that was the basis of “Obamacare.”

It was an awkward moment for Romney, who just minutes earlier had promised to “stuff it down [President Barack Obama’s] throat and point out it is capitalism and freedom that makes America strong.” “We’ll make it work in the way that’s designed to have health care act like a market, a consumer market,” Romney said, “as opposed to have it run like Amtrak and the Post Office.”  When pressed, Romney pointed out that Massachusetts residents were still purchasing private health insurance:

First of all, the system in my state is not a government-run system. Ninety-eight — 92 percent of the people had their own insurance before the system was put in place, and nothing changed for them. They still had the same private insurance. And the 8 percent of the uninsured, they bought private insurance, not government insurance. And the people in the state still favor the plan three to one.

Romney’s right. Massachusetts doesn’t have a “government-run” health insurance system. It has a government-regulated health insurance market in which individuals are compelled to buy their own insurance. That’s exactly what the Affordable Care Act has, too. If Obamacare is socialism, then so is Romneycare. And if Romneycare is the distilled essence of free market capitalism, then Obamacare is, too.

This was one of the many moments in last night’s debate when rhetoric about “free market capitalism” clashed with what the Republicans on stage were actually saying. Santorum called for special tax breaks for manufacturers while attacking Obama for supposedly wanting to put more people on food stamps. Gingrich and Romney waxed rhapsodic about the New Deal—at least the part of it that provided veterans with government assistance in buying homes and finding jobs. These sorts of efforts are, for some reason, exempt from Republican dogma that government assistance of any kind turns people into state-dependent zombies, shuffling towards their next handout.

To the Republican candidates, manipulating the tax code for the benefit of corporations is “free market capitalism.” Manipulating it to provide everyone with health insurance coverage is “socialism,” which is so precious to Republicans that they only want veterans to have it. Republican rhetoric aside, this election is not some sort of great philosophical battle between socialism and free market capitalism. It’s about for whom, and to what extent, government rigs the game.