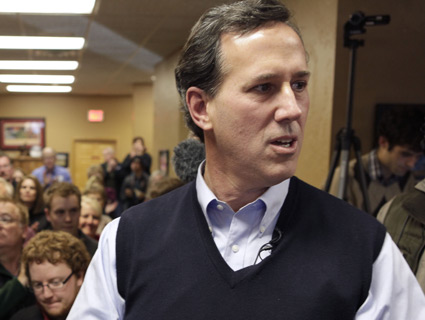 It’s hard to figure why political candidates frequently say things that are not true—especially when often it is easy to check their comments. Newt Gingrich said he was retained by Freddie Mac as a historian. Mitt Romney insisted he hasn’t done backflips (or front-flips) to become more conservative. On Thursday, Rick Santorum, the former Republican Pennsylvania senator, while talking to a conference of college students in Concord, New Hampshire, was insisting that voters should elect candidates whose values and judgment they can trust, because you never know what issues will emerge and confront the nation’s chief executive. And he was ready with a dramatic example:

The presidential debates the last time around, you know how many questions there were on health care in all the debates—one.

His point: No one could know at the time that health care would become such a central focus of the years after the 2008 campaign. So, conservatives, you better pick a loyal and unwavering right-winger who will be ready to take on whatever materializes.

Well, by now you’ve guessed the ending. Santorum was wrong. Throughout the GOP debates during the 2008 presidential contest, health care was frequently raised in questions posed by the moderators to the candidates. My colleague Adam Serwer pulled together a partial list.

* May 3, 2007, debate: “Gov. Romney, a year ago, it seemed that you couldn’t wait to tell the world about your health care experiment in Massachusetts. Since then, it’s been criticized by conservatives as something Hillary Clinton could have devised. You hardly mention it on your website. What’s changed?

* June 5, 2007, debate: “Millions of Americans are dissatisfied with the current state of our health care system, and US employers are at a disadvantage due to the high cost of health insurance. What would you do to fix the health care system? And would you support implementing a single-payer system, in which the government acts as the insurer in order to save enough money to cover the millions of uninsured and to lower premiums for the rest of the US population?”

* October 21, 2007, debate: “Sen. McCain, your plan for lowering health care costs involves switching people from employer-provided health care to policies they buy on their own. There’s concern that could lead insurance companies to cherry-pick their clients. You also want to limit the amount doctors can charge for chronic diseases, which skeptics worry could make it difficult for people with diabetes, for example, to find doctors to take care of them. How would you deal with these two problems?”

* January 5, 2008, debate: “We’re the only industrialized nation in the world that doesn’t insure all of our citizens. If we can afford a trillion-dollar war in Iraq, why can’t we afford medical insurance for everybody?”

You get the picture. During the 2008 primary season, health care was a topic of contention on both the Republican and Democratic sides. Was Santorum in a coma? I cannot even guess at a good reason why he made this particular false statement.

The health care comment wasn’t the end of Santorum’s factually-challenged remarks at this one campaign stop. He also noted that President Barack Obama has refused to cut government spending. (The president agreed to $38.5 billion in spending cuts in the 2011 budget and then accepted over $2 trillion in cuts over ten years as part of the debt-ceiling deal.) He noted that the only thing some people know about George Washington is that he had slaves. (Which people?) He also insisted, “America is a melting pot, not a salad bowl.” Okay, that statement may be hard to check. But it’s clear that accuracy is not a top-priority value for this supposed values-based candidate. After all, if he gets this wrong, how can voters trust him when he says, “I do not believe life begins at conception. I know that life begins at conception”?