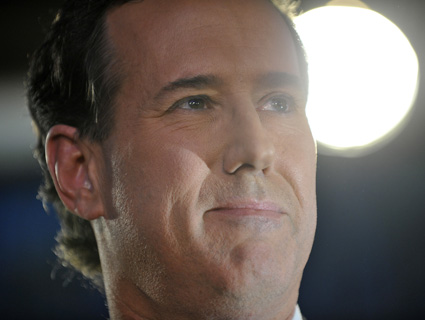 About 30 minutes after Rick Santorum left the stage here at the Stoney Creek Inn in Johnston, Iowa, volunteers are beginning to wheel away the sound system, the windows have been flung open in a valiant effort to clear away the smell of about 500 people who have been penned in for a few hours too long, and, over in the corner, Jim Bob Duggar is holding court about how we got here. As he talks, the nominal winner of the Iowa Republican caucus is still unclear—but whatever the final tally, the reality TV star, former state representative, and father of 19 has clearly identified the loser. “This is a huge defeat for Mitt Romney,” Duggar says, wearing what looks to be the same suit he wore on Monday at the Pizza Ranch in Boone. He walks through Romney’s missteps: an individual mandate in Massachusetts, a health care system that pays for abortions, and on top of all of that, “he supported 180 marriage licenses for homosexual couples.”

Romney ultimately squeaked past Santorum by eight votes on Tuesday day night, in what was by far the closest margin in the history of the Iowa caucuses—30,015 to 30,007, good for a .000065 percent advantage. Romney will travel next to New Hampshire, where he’s expected to win big next Tuesday, and from there to South Carolina, Florida, Nevada, and so on, until the nomination is finally his. On Tuesday night, Rick Perry, once Romney’s biggest rival, acknowledged that he was reevaluating his campaign; he and Michele Bachmann are expected to drop out soon.

But Duggar has a point: After Romney spent millions of dollars to win the state over the course of five years, benefited from $3.5 million in advertisements from his allied super-PAC, and saw four successive Republican front-runners fail fantastically, more than three out of four Iowa Republicans still voted for someone else. And they did it for reasons that go much deeper than his personality.

That was the takeaway here at Santorum headquarters, anyway, where about 500 supporters, many of whom hadn’t made up their minds about whom to vote for until the last week of the race, gathered to celebrate their candidate’s surprise showing. They sang hymns, introduced themselves to the Duggars (a family friend had brought souvenir photos for anyone who wanted one), and reflected on the road they took to get there. Chuck Laudner is something of a celebrity among Santorum supporters; he’s been ferrying the candidate across the state in his pickup truck, “the Chuck Truck,” for the last six months. He credits Santorum’s ubiquity in the Hawkeye State since he entered the race. “The 99 County Tour is a little bit of an understatement because we went to 99 of the 99 counties again,” he says. “You have to win their trust, and then you win their votes.”

“You can tell a lot about a person by the enemies he makes. The fact that Planned Parenthood hates him really endears him to me.”

Deb Taylor of Polk City has a Rick Santorum sticker splashed over a T-shirt with “Christ” printed on the front next to an image of Jesus’ face printed on the moon. “We know he’s been a champion for life,” she says. “We’re in the life movement. You know they lost a kid—I don’t think he talked about that.” In Santorum’s family, she sees her own. “They’ve home-schooled seven kids. Our son was home-schooled. All the home-schooled kids I know are respectful and polite and they are totally unafraid to talk to adults.” In his speech, Santorum thundered that “the state of our culture under this administration continues to decline, with values that are unlike the values that built this country.” Mitt Romney says much the same thing, but with Santorum, you can see that he lives it.

“I’ll tell you something that may be unique to me,” Aaron Gunsaulus tells me. We’re all huddled around the television set where Fox’s Megyn Kelly and Bret Baier are somberly informing their viewers that two precincts worth of ballots have gone missing. “I like who he’s made as enemies,” Gunsaulus says of Santorum. “You can tell a lot about a person by the company he keeps. You can also tell a lot about a person by the enemies he makes. The fact that Planned Parenthood hates him really endears him to me.” It’s not all that different from what another volunteer, Steven Wagner, told me earlier in the evening: Santorum’s “the militant candidate.” And that’s a good thing.

The fundamentals of the race make Romney’s nomination increasingly certain, but it will not be painless. No one I spoke with at the Stoney Creek Inn seemed content to settle for a medal of participation just yet. Santorum’s near-win isn’t just a vote of no confidence for Romney; it’s a reminder of the lingering power and radicalism of religious conservatives in the state. In 2012, a quarter of Iowa GOPers threw their support to a candidate who believes birth control should be banned, blacks should stop asking for handouts, gay sex is akin to bestiality, and Shariah law is an existential threat.

Jamie Johnson, Santorum’s Iowa Coalitions Director, is mobbed as he makes an exit. “Jamie, we did it,” says a raspy-voiced man by the big screen. It’s the end of the night and everyone is a little shot. “We did it, we did it.” He repeats this. Johnson takes his hand, both hands clasped, and drops his voice down: “Joe, you did it. You did it. Honestly. Thanks for your prayers, your hard work, your tears. You did it.”

Johnson makes the rounds, a hand here, a hand there—”we’re awaiting orders.” Maybe it’s South Carolina. Two kids want to get a photo with them so they can show it to their social studies teacher, “a total liberal.” A volunteer gushes about their remarkable turnaround and Johnson responds only with the opening line of Santorum’s quasi-victory speech: “Game on.”