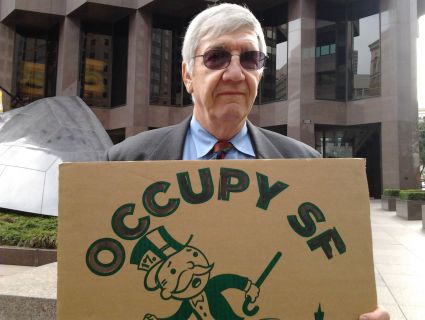 As president of the Pacific Exchange in the late 1990s, Warren Langley oversaw the West Coast’s biggest financial center, a trading floor where some 17 million shares of stock changed hands daily. Though he served at the pleasure of traders and investment banks such as Morgan Stanley, he is no longer interested in pleasing them. Yesterday, he stood on a hillside in San Francisco’s Financial District in front Morgan Stanley’s and Goldman Sachs’ regional headquarters to declare his support for Occupy Wall Street West, a coalition of 50 groups planning a slew of anti-bank protests Friday.

“From the inside, I watched Goldman Sachs, the big banks, the hedge funds bet our money and then get bailed out when they lost,” said Langley, surrounded by protesters holding images of a devious-looking Mr. Moneybags (Monopoly) character. “I saw corporations and the 1 percent buy our congressmen and senators and then pay no taxes, get subsidies, and move jobs overseas. This is our last chance to level the playing field and let you and our kids and grandkids have the opportunities that I started with.”

Langley, 69, began working in finance in the 1980s, rising to become CEO of Hull Trading Company, a $500 million proprietary trading firm active in stock options and derivatives. The job often involved pressuring the Securities and Exchange Commission (SEC) to loosen financial regulations. “I was just trying to push the boundaries of things that would help me make profits,” he confesses. “I didn’t perceive the risk to the economy, and I think that is the part that really changed for me.”

By way of example, Langley recalls how he convinced the SEC to approve a mid-1990s partnership between Hull and a large commercial bank. Technically, the Glass-Steagall Act prohibited commercial banks from engaging in the sort of speculative trading done by firms like Hull, but the SEC—urged on by industry lobbyists—granted more and more exceptions to the rule.

In 1999, Congress repealed Glass-Steagall, paving the way for the 2008 financial crisis. “It was pretty risky to let proprietary trading affect the bank side, which was just loaning money to people,” Langley says. “That lesson was learned in 1929, which is why Glass-Steagall was put in place. And then we saw in the 1990s they unpeeled all that.”

Though now retired, Langley oversaw the Pacific Exchange until 1999. The New York Stock Exchange purchased it in 2006, part of a wave of consolidation that swept the financial sector from the early ’90s and resulted in institutions that were “too big to fail.” (Check out our banking-consolidation chart.) Meanwhile, the rise of hedge funds, private equity, and complex derivatives were making Wall Street far tougher to regulate.

Langely considers himself “pretty much a fiscal conservative,” but after the crisis, he was taken aback that lawmakers didn’t do more to repair the system. The Volcker Rule, part of the Dodd-Frank law that was intended to reinstate Glass-Steagall, was too watered down by lobbyists, he says. Wall Street needs a single powerful regulator, instead an alphabet soup of agencies. And he is concerned that financial firms are still so large and interconnected that the failure of any one of them could create another economy-destroying chain reaction. “The biggest obstacle is lobbying by the big investment banks,” he says. “On both sides of the aisle. I mean, Chuck Schumer is one of the biggest protectors of Wall Street in Congress, and he’s a Democrat. And then there’s the general Republican philosophy about free-market capitalism: ‘We shouldn’t have rules.’ Well, that doesn’t work.”

In early October, Langley was Skyping with a friend, Ben Cohen of Ben & Jerry’s fame, who’d flown down from Vermont to scoop free ice cream for the Zuccotti Park occupiers. Intrigued, Langley stopped by Occupy San Francisco encampment at Justin Herman Plaza and found himself impressed by the protesters’ critiques of income inequality and the corporate domination of politics. He has since donated money to the encampment. In October, he joined protesters on a march and Union Square rally, where he got up and spoke to the crowd about income inequality.

Langley says his friends in finance “like the game when it is tilted in their favor” but that they “understand that it’s not particularly fair and they have a hard time defending it.” Still, many of them dismiss the Occupy movement as directionless; one tauntingly offered to donate $250,000 to Occupy Wall Street “if they just tell me their plan.” Langley counseled patience, telling him that a movement, unlike a corporation, “doesn’t necessarily start with a plan.”

Occupy Wall Street West certainly has a detailed plan for Friday. Some 30 separate protests will include a “Food Bank of America” at a Bank of America branch, an attempt to take over an unspecified foreclosed building, and a squid fry in front of Goldman Sachs—in reference to Matt Taibbi’s Goldman squid metaphor. An Occupy the Courts demonstration at a federal courthouse will correspond with 100 similar actions around the nation to mark the second anniversary of the Supreme Court’s Citizens United decision, which opened the floodgates to corporate spending on federal elections.

Langley plans to join a separate march on Bank of America, which was headquartered in San Francisco before moving in 1998 to Charlotte, North C. “I don’t think that these people do anything evil or illegal for the most part,” he says. “It’s just that the rules have been set up for them. The game’s been rigged.”