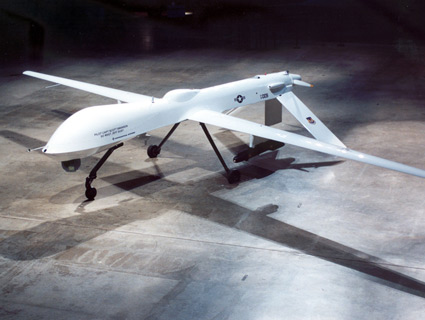 During his Google+ hangout on Monday, President Barack Obama took a question from “Evan in Brooklyn” on the efficacy of US drone operations. The president promptly went to bat for his administration’s ramped-up drone war.

Obama began by clarifying that the CIA and military are “not engaging in a bunch of drone attacks inside of Iraq” and drawing a distinction between surveillance drones and, say, Predator drones. Addressing the issue of collateral damage in countries like Pakistan, the president praised the precision of drone strikes, saying that such operations are kept on “a very tight leash.” Obama also said that he wanted to “make sure that people understand…drones have not caused a huge number of civilian casualties” and that targets are carefully picked from “a list of active terrorists.” (He dismissed the notion that he was conducting “a whole bunch of strikes willy-nilly.”)

This Google+ hangout marked the first time the president has spoken publicly about drone attacks on Pakistani soil. The CIA’s (sort of) secret program in the Middle East and South Asia is something that the president and other US officials generally refrain from acknowledging publicly unless there’s a high-priority kill or they’re threatening to take out the Jonas Brothers:

It’s a bit hard to pin down the president’s definition of a “huge number of civilian casualties.” Estimates on the civilian body count from drone operations vary wildly: Taking just the targeted Pakistani tribal areas, some estimates give a 10 to 1 ratio of civilians killed for every one militant. Other estimates claim that civilians account for roughly 20 percent of the deaths. (The CIA has made the widely panned claim of zero civilian casualties.)

Obama’s “tight leash” appraisal doesn’t provide much comfort, either: The scant congressional oversight of the drone wars certainly isn’t helped by the fact that the Joint Special Operations Command and the CIA maintain their own, separate “kill lists.” And as my colleague Adam Serwer notes, that “list of active terrorists” that the president likes to talk about has profound legal implications for foreign nationals and American citizens alike:

There’s also an Orwellian element to [Secretary of Defense Leon] Panetta’s argument that anyone on the US kill list should simply turn themselves in and get a fair trial…Americans who might be on the list have no way of knowing they’ve been targeted absent leaks from administration officials or the sound they hear right before they’re annihilated by a Hellfire missile. (Even calling friends, family, or a lawyer to turn yourself in could be the act that gets you killed.) If such an individual did know he was on the list, how exactly is he supposed to believe he’d have “due process” after giving himself up, given that he’s already been sentenced to death by the administration? Is a fair trial even possible under those circumstances?

So the problem isn’t the fear that the Obama administration is ordering these drone strikes “willy-nilly”; it’s the very plausible belief that the current ever-expanding system of precision strikes is inherently flawed.