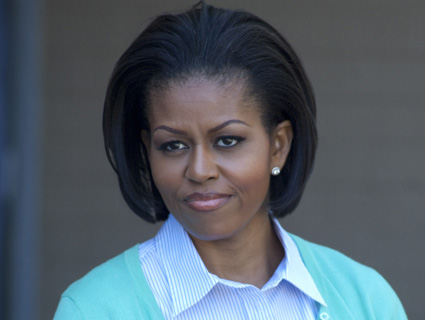 The Obamas, the new blockbuster political book by Jodi Kantor, tells the tale of what happens to a grounded, high-achieving couple when they become the first African American President and First Lady of the United States. It’s already making waves for the obligatory red-meat political tidbits (Rahm! Gibbs! Depp!), but what’s more fascinating is Kantor’s portrait of the First Couple as a partnership—and a First Lady who may be the president’s greatest asset in the upcoming election. It’s all set against the backdrop of ordinary life in the White House—a home built by slaves—and its more extraordinary elements. Here are some details that caught my eye:

3 Reasons to Love Michelle Obama
1. Michelle on her role as cover girl: “There are young black women across this country and I want them to see a black woman on the cover of Vogue.”
2. On a rare visit back to her Chicago home, she retreated back to the garden wearing yellow rubber gloves.
3. She’s big on hugs.

3 Surprising Things About Michelle Obama
1. In the morning, she exercises while watching Morning Joe.
2. After Robin Givhan panned the shorts she wore to the Grand Canyon, she checked in with Robert Gibbs afterward, “worried and contrite.”
3. “Every few months Michelle Obama liked to crash a White House tour.” (Often freely dispensing the above-mentioned hugs.)

3 Parenting Tips From the Obamas
1. Malia and Sasha are only allowed to watch TV and surf the internet on weekends.
2. The girls are not permitted to own their own cell phones.
3. Beware the paparazzi. (“‘I had more fun once the cameras left,’ Malia told him. ‘No offense,’ she said politely to the aide wielding the video recorder. ‘I don’t like cameras.'”)

Why I Want to Party With the Obamas
1. “Traditional Thanksgiving spread with an African American spin—turkey, collard greens, oyster stuffing, macaroni and cheese.”
2. Never mind Tim Burton and Johnny Depp: Their Halloween party featured the real Chewbacca. Have you ever partied with a wookie? (Oh, and gimme a break, hand-wringers, it was for military families.)
2. “Their holiday tradition was to work on talent-show acts throughout their vacation, presenting them right before they left.”

3 Things That Will Drive Conservatives Nuts
1. “When Craig Robinson took a job in Dean Witter’s training program, he quickly noticed that the most lucrative investments were in the hands of white investment professionals. The few top-earning African Americans at the firm all had degrees from elite business schools—a credential their white counterparts didn’t seem to need.”
2. The trigger for Michelle Obama’s much-maligned trip to Spain was the death of a 76-year-old Chicago bus driver who grew up in segregation-era Mississippi.
3. “As the weather warmed, the president started playing golf on weekends again. It was a meditative escape, a chance to be outdoors.”

3 Ways in Which the Obama’s White House Experience Would Differ From That of, Say, Mitt Romney
1. “The staff were supposed to be invisible, but the Obamas…couldn’t bring themselves to treat them that way. Many were middle-aged and older African Americans—strangers to the president and first lady but also instantly familiar to them.”
2. At a White House gathering for their family from Chicago: “The kids in the family gathered under a portrait of George Washington for a photograph: a picture of how far the nation had come and how long the journey had taken.”
3. First Couples can borrow artwork from Washington museums to hang in their quarters. One chosen by the Obamas: “Black Like Me.”

3 Reasons To Love Marian Robinson
1. She refused to have the White House staff do her laundry.
2. She turned down an Oprah interview so she could continue to shop at Filene’s Basement unrecognized.
3. During Obama’s 2004 Senate campaign she had pined “like a schoolgirl” to meet “her heroine”…Hillary Clinton.

*Washington Read: flipping straight to the back index to check for your name