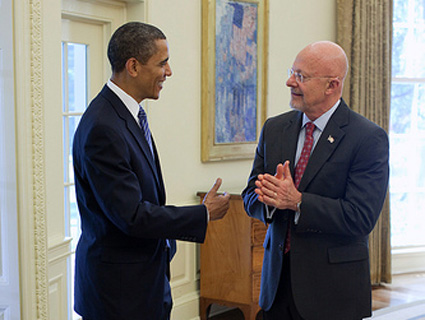 The consensus of the US intelligence community is that Islamist political groups like the Muslim Brotherhood could act as a buffer against extremist groups like Al Qaeda, according to the prepared remarks of Director of National Intelligence James Clapper before the Senate Select Committee on Intelligence Wednesday.

Clapper’s testimony offered an unclassified summary of the 2012 Worldwide Threat Assessment, which compiles the perspectives of all the various intelligence agencies. In the section on the Arab Spring, Clapper says that intelligence officials believe that Al Qaeda’s appeal will be diminished if the Arab world’s fledgling democracies can deliver on key promises:

If, over the longer term, governments take real steps to address public demands for political participation and democratic institutions—and remain committed to CT efforts—we judge that core al-Qaeda and the global jihadist movement will experience a strategic setback. Al Qaeda probably will find it difficult to compete for local support with groups like the Muslim Brotherhood that participate in the political process, provide social services, and advocate religious values. Nonviolent, pro-democracy demonstrations challenge al Qaeda’s violent jihadist ideology and might yield increased political power for secular or moderate Islamist parties.

Clapper’s testimony does warn, however, that “prolonged instability or unmet promises of reform” would create “conditions that al Qaeda would work to exploit.” Islamist parties that have met success at the polls have yet to have their commitment to pluralistic democracy tested by an election loss. There are positive signs, particularly from Tunisia, but democracy is about more than elections—it’s about individual rights and protections for everyone, not just those who come out on top when the ballots are counted. But since Al Qaeda’s ideology is predicated on the notion that only violent conflict can bring meaningful political change, every functioning democracy in the Middle East helps disprove its thesis and diminsh its appeal.

This conclusion is likely to be controversial among conservatives, many of whom view the Muslim Brotherhood as part of a worldwide Islamist conspiracy to establish a global caliphate, including here in the United States.