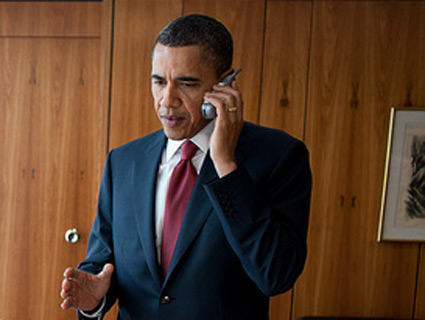 Late into Thursday night’s Republican presidential debate at the University of North Florida in Jacksonville, the conversation inevitably turned to the Israeli-Palestinian conflict. Occasional front-runner Mitt Romney took that as his cue to talk as little about the peace process as possible and play up President Barack Obama’s supposed foreign policy weakness as much as possible.

“The Palestinians want to eliminate Israel,” Romney said, painting things with a really, really, really broad brush. He went on to criticize President Obama for supposedly having said “nothing” during his September speech at the United Nations “about thousands of rockets being rained in on Israel from the Gaza Strip.” Well, that is not true. (Romney also repeated his claim that the president has tossed Israel under the proverbial bus.)

Newt Gingrich wasn’t far behind in attacking Obama, insisting that the Washington response to Palestinian “acts of war” was yet another contemptible example of the current administration’s fecklessness abroad and at home. Here’s video from the debate:

Let’s get this out of the way quickly: Here’s the president— delivering that speech to the UN General Assembly that Romney was talking about—addressing all those rockets “from the Gaza Strip”:

America’s commitment to Israel’s security is unshakeable…[S]o we believe that any lasting peace must acknowledge the very real security concerns that Israel faces every single day. Let us be honest with ourselves: Israel is surrounded by neighbors that have waged repeated wars against it. Israel’s citizens have been killed by rockets fired at their houses and suicide bombs on their buses. Israel’s children come of age knowing that throughout the region, other children are taught to hate them. Israel, a small country of less than eight million people, look out at a world where leaders of much larger nations threaten to wipe it off of the map.  The Jewish people carry the burden of centuries of exile and persecution, and fresh memories of knowing that six million people were killed simply because of who they are. Those are facts. They cannot be denied.

Now, check out then-Sen. Obama in July 2008, waxing personal about rockets being launched at Israeli civilians:

If somebody was sending rockets into my house where my two daughters sleep at night, I’m going to do everything in my power to stop that. I would expect Israelis to do the same thing.

There you have it: Barack Obama saying something about all those rockets.

Also, it should be fairly obvious by now that Barack Obama is not planning on defriending Israel. Despite talk of the “Jewish backlash” that supposedly resulted from Obama’s mention of 1967 borders last year, the Obama administration has been rock-steady on military aid and sales, played it super-safe on the Palestinian bid for statehood, and expressed Washington’s “ironclad” commitment to Israel’s security time and time again.

Furthermore, if Israelis are supposed to be living in fear of President Obama not caring about existential threats coming their way, then, according to plenty of recent polling, somebody forgot to tell the Israelis.