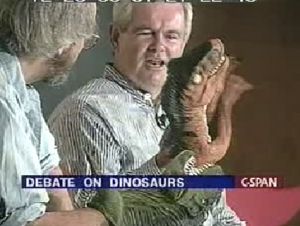 Then-Speaker of the House Newt Gingrich plays with a dinosaur puppet in Bozeman, Montana in 1998Courtesy of C-Span

GOP presidential candidate Newt Gingrich was challenged by supporters at an event at a Coca Cola bottling plant in Atlantic, Iowa on Saturday, on issues ranging from faith to his consulting work for Freddie Mac to his brief support for cap-and-trade. Gingrich, flanked by his wife, Callista, his daughter Jackie, and a 20-foot-high stack of Mello Yello, told voters that anyone who accuses him of taxing carbon as a means to reduce greenhouse gas emissions is “dishonest” (evidence to the contrary notwithstanding), and then issued a curious explanation for why he doesn’t trust the science on global warming: He’s a scientist himself, and he knows better.

The carbon-tax question came from a senior citizen who had signed up to give a speech on Gingrich’s behalf on caucus night. The man had taken a look at campaign talking points, but his son had additional questions about Gingrich’s global warming positions, and so the father came to Gingrich seeking clarity. The former speaker had, after all, cut an ad with Nancy Pelosi calling for the federal government to take action on climate change. After first explaining that “first of all, it hasn’t been proven” that global warming is really happening, he rounded out his answer by citing his own analysis.

“I’m an amateur paleontologist, so I’ve spent a lot of time looking at the earth’s temperature over a very long time,” Gingrich said. “I’m a lot harder to convince than just by looking at a computer model.”

We’ve chronicled Gingrich’s passion for dinosaurs. In addition to keeping a T-Rex skull in his congressional office (loaned from the Smithsonian), he twice debated famed Montana State paleontologist Jack Horner on the feeding habits of the T-Rex, with Gingrich arguing that the king of dinosaurs could not have been a scavenger because “I saw Jurassic Park and he ate a lawyer and it wasn’t a dead lawyer.” So while not professionally trained, his paleontological analysis clearly does carry a lot of weight.