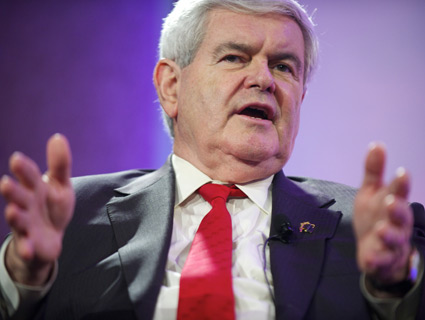 The Ghost of Wife No. 2 hit the stage of the Republican presidential campaign on Thursday, when hours before the final debate in South Carolina, ABC News reported that Marianne Gingrich had said that Gingrich, while having an affair with Wife No. 3-to-be, asked her for an “open marriage,” in which Marianne would share Gingrich with his then-mistress.

Gingrich’s six-year-long extramarital tryst with Callista Bisek, a congressional aide at the time, is not news. But his alleged effort to define his own marriage as a union between a man and a woman and a woman had not been previously reported.

It’s not much of a surprise that Marianne would lob this bombshell at this point. She and Newt went through an acrimonious divorce in 1999. Back then, as a recovering Newt-watcher, I covered some of those proceedings and on occasion spoke to Marianne. What was striking at the time was that Gingrich seemed to be the one acting vindictively in the proceedings. Marianne appeared to just want a clean exit (with the right amount of compensation). Here’s part of a dispatch I wrote for Salon:

“We don’t know. We just don’t know. If you find out, let me know. It’s a mystery.” So said Marianne Gingrich, the soon-to-be ex-wife of former House Speaker Newt Gingrich, when asked why she thought Newt was being a hard-ass in the divorce proceedings he initiated against her.

We were talking Tuesday morning in a courtroom in the Superior Court of Washington, minutes before the latest hearing in the case, and I remarked that it was hard to make sense of Newt’s scorched-earth approach to the divorce, which has already revealed his six-year-long extramarital affair with congressional aide Calista Bisek and tainted whatever was left of his image as a family-values Republican.

If he’s pocketing $50,000 per speech, as reported, why wouldn’t he just strike a deal and avoid all the negative publicity? His strategy of all-out fighting — and dragging his new love into the mess — seems irrational to an outsider, I commented.

“It looks that way to an insider,” Marianne said with a sad smile.

Her smile was broader an hour and a half later, after Judge Brook Hedge had ruled that Bisek had to turn over most of the records that Marianne Gingrich’s attorneys had sought from her — including telephone bills,?credit card bills, bank statements, correspondence between her and the ex-speaker, appointment books, gifts from Newt and other materials dating back five years. (Neither Newt nor Bisek attended the hearing.)

Bisek’s attorney, Pamela Bresnahan, had argued that the request was an invasion of Bisek’s privacy and that most of the material was not relevant to the divorce proceedings. But Judge Hedge shot her down, noting that Bisek is “not just a bystander” in Gingrich vs. Gingrich. Consequently, Marianne Gingrich’s lawyers — John Mayoue, an Atlanta attorney, and Victoria Toensing, the Republican talking head and lawyer who once counted Newt as an ally — will have the opportunity to comb Bisek’s papers and seek out information about the secret affair Gingrich maintained while he was rising to power.

They also will get the chance to question Bisek directly. After some legal squabbling, Bisek agreed to submit to a deposition in December….

In the meantime, Newt has his own problems brewing with his wife’s attorneys. In August, Mayoue sent the former speaker a list of questions, a standard procedure in the discovery process of a divorce case. Lawyers customarily try to obtain answers to interrogatories before they hold depositions.

Mayoue’s questions covered all the obvious territory. Newt Gingrich was asked to identify all persons who had any knowledge regarding his break from Marianne. He was probed about his finances, since Marianne suspects he has hidden assets from her. He was asked to list all his bank accounts and to note all transfers of money or property in excess of $1,000 that he has made since Jan. 1, 1997. He was asked if he had received any treatment or counseling from a pastor or mental health professional in the past five years.

He was asked to identify “any and all persons, other than your wife, with whom you’ve had sexual relations during this marriage” and to provide the “dates, times and places in which said sexual relations occurred.” He also was asked to identify anyone who knew of these affairs. Question No. 25 inquired, “Do you believe that you have conducted your private life in this marriage in accordance with the concept of ‘family values’ you have espoused politically and professionally?”

At the time, Newt Gingrich’s legal strategy did not make any sense. It looked as if a stream of sewage was about to pour forth. I wrote:

Why isn’t Newt trying to head this ugly divorce trial off at the pass? Why are there no settlement talks occurring?

“My hunch is that he doesn’t care about his public image any longer,” says one of Newt Gingrich’s associates. “He’s enjoying being in the private sector, and that means not having to worry about bad press.”

This may be a sign that Newt has given up on politics. (Although talk of his political rehabilitation has always seemed far-fetched, he did refuse to rule out future runs when he announced his resignation a year ago.)

Newt-haters theoretically could have feared a Nixon-like return from the near-dead — but given how Newt is handling this case, they need not fret any longer.

Actually, a few weeks later, Newt did settle the divorce. That was before he or Callista had to turn over records and be deposed. Marianne received a decent deal (I was told), and the details of Newt’s private life would remain private. Yet as he now attempts a Nixon-like comeback, Marianne is speaking out and placing in public view some of what she did not squeeze out of Newt during their time in court, demonstrating that it’s never too late for a bitter divorce to get worse.