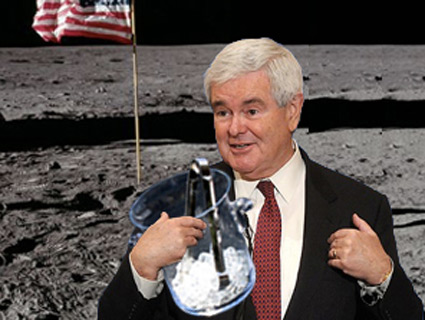 It was one of the oddest lines of the already plenty-odd 2012 campaign. On Thursday, the Mitt Romney HQ zapped out a statement from former Republican Senator Bob Dole blasting Newt Gingrich for being erratic, arrogant, and a liability to his party. This was hardly a shocker, given that Dole can partly (but only partly) blame Gingrich for his loss to Bill Clinton in the 1996 contest. But the Dole statement did contain a weird sentence referencing that campaign:

Newt would show up at the campaign headquarters with an empty ice-bucket in his hand—that was a symbol of some sort for him—and I never did know what he was doing or why he was doing it.

Gingrich and an ice bucket? Sounds surrealistic. But last week, my colleague Tim Murphy explained the connection between the then-House speaker and his bucket:

Leading up to the 1996 election, Gingrich criss-crossed the country brandishing a white bucket, as a symbol of how Gingrich had cut bureaucratic waste by eliminating an anachronistic ice delivery service to congressional offices. Dating back to before the advent of refrigeration, ice had been delivered via white buckets to each office twice a day at no cost. Gingrich boasted that the program had cut $400,000 per year from the federal budget by eliminating 23 paid staff positions. “If there was any one symbol I wish we could be remembered by, I believe it should be an ice bucket,” Gingrich said at the time. “We didn’t authorize a study, we didn’t phase it out, we didn’t call for a training program, we just went cold turkey.”

There was, of course, a catch:

Gingrich didn’t actually end the free ice service at the Capitol; he just created a new system. Under Gingrich’s watchful eye, Congress set up five ice distribution centers around the Capitol complex, so that staffers could haul their daily load of ice back to the offices. The ice was still free, in other words, and it was still being distributed. According to Roll Call at the time, Gingrich was himself taking advantage of the free ice entitlement he derided, dispatching a staffer to the ice distribution center twice a day to fill a bucket.

No wonder Bob Dole remains mystified to this very day.