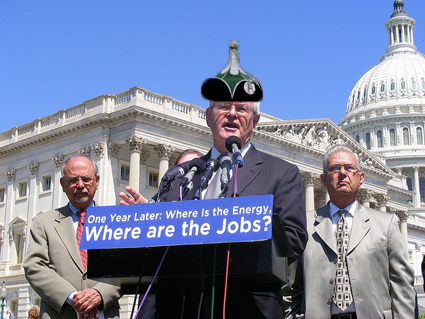 By April 1997, House Speaker Newt Gingrich’s approval rating had dipped to 14 percent in the national polls. The balance of power in his party was beginning to shift to the now-GOP controlled Senate, and there was an ethics investigation targeting him for several allegations of wrongdoing. Rep. Peter King (R-NY) went on the record describing his speaker as “road kill.” But Gingrich was riding high, for he had just conquered Central Asia.

In advance of Mongolia’s national elections in 1996, Gingrich and Republican allies dispatched a band of consultants to groom a slate of free-market-oriented candidates. They crafted a “Contract With the Mongolian Voter,” based on the “Contract With America” Gingrich and his Republican allies composed for the 1994 election that brought him to power. The Gingrich-backed Mongolian candidates pledged to privatize 60 percent of state property, cut social services, slash taxes, and “support herders’ rights to use non-cash payment methods.” Baby steppes. As the Washington Post reported, “Even the new Mongolian election law was lifted verbatim from the election law manual of Texas.”

The election was a huge success for Gingrich. His Mongolian allies went from five votes in the legislature to 50—out of a total 76. Maureen Dowd dubbed him “Speaker of the Yurt.”

Holding up a crown-shaped hat that had been giften to him by an adoring Mongolian, Gingrich appeared on stage at the annual GOPAC conference in Washington, DC to claim victory. From that speech:

“On a stool in his portable felt and canvas yurt, Yadamsuren, a seventy-year-old nomadic sheepherder, offered a visitor chunks of sheep fat and shots of fermented mare’s milk to ward off the unspeakable cold….Many miles from the nearest neighbor, he spoke glowingly of the work of House Speaker Newt Gingrich and the Republican Party.”

I am not making this up. I am reading from the Washington Post, this is a direct quote from Mr. Yadamsuren: “I read the contract with the voter very closely.”

Isn’t it exciting to know that not only in America but in Mongolia, ideas are working?