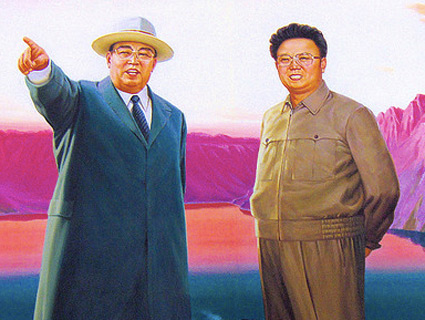 With the death of Kim Jong Il, questions regarding succession and the North Korean power structure are front and center. It’s been nearly three years since Kim Jong Un, Kim Jong Il’s third son, was nominated to succeed his father. On Monday, North Korea’s state media referred to Kim Jong Un as the “Great Successor,” and called on the people to “faithfully revere” the 20-something, Swiss-educated heir apparent who would guide them in changing “sadness to strength and courage [to] overcome [the day’s] difficulties.”

Kim Jong Un is the late dictator’s youngest son. For a terse primer on why Kim Jong Nam, the eldest son, is not a shoo-in to become the next Supreme Leader, read the last lines of the AP obituary that ran Sunday night:

His eldest son, Kim Jong Nam, 38, is believed to have fallen out of favor with his father after he was caught trying to enter Japan on a fake passport in 2001 saying he wanted to visit Disney’s Tokyo resort. His two other sons by another woman, Kim Jong Chul and Kim Jong Un, are in their 20s. Their mother reportedly died several years ago.

Until this incident at what is now Narita International Airport, the older sibling had been expected to take the reins following Kim Jong Il’s death. In the years since the 2001 micro-scandal, Kim Jong Nam has openly admitted that he is “not interested in the politics” of his country, and has immersed himself in a cushy lifestyle with two wives, a mistress, and a few kids stashed away in mainland China. It’s funny to think that this despot-kin-turned-full-time-playboy (those are fairly typical of oppressive regimes) blew his chances at the big title because he wanted to lounge around a Disney tourist trap in Japan. (The faux pas seems even sillier when you factor in just how sensitive North Koreans are about anything involving the Japanese, seeing as how they haven’t even started to get over the whole 35-years-of-brutal-occupation thing.)

So you can sort of thank the combined efforts of Mickey Mouse and 20th-century Japanese imperialism for ensuring the rise to power of Kim Jong Un. And thus a grad-student-aged, binge-drinking, 200-pound Kobe Bryant fan who reportedly has issues with hypertension and diabetes will likely become the next ruler of a nuclear-armed state that has one of the most appalling human rights records in the world today.

The more you learn about North Korea’s totalitarian ruling family, the more they come off like a sick cross between The Godfather, Arrested Development, and certain scenes in Zoolander.