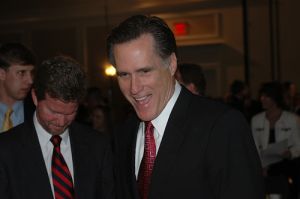 Mitt Romney’s years-long quest to paint President Barack Obama as a sniveling appeaser who wants to make out with Mahmoud Ahmadinejad ran smack into a wall last spring when Obama announced that Osama bin Laden had been killed. So Romney’s taken to saying that “I think other presidents and other candidates like myself would do exactly the same thing.”

It may be hard to remember now that Obama feels comfortable enough to joke about ordering Bin Laden’s death, but the circumstances of such a raid—an unauthorized incursion into Pakistani territory—was at one point an issue during the 2008 campaign. As a candidate, Obama declared that: “If we have actionable intelligence about high-value terrorist targets and President Musharraf won’t act, we will.” For this statement, he was attacked as insane and irresponsible by most of his Democratic and Republican political rivals, who suggested the remarks made him unfit to be president.

Among those attacking Obama was Romney, then on his first run at the Republican nomination. Now Democrats are emailing around a Romney 2007 statement: “I do not concur in the words of Barack Obama in a plan to enter an ally of ours… I don’t think those kinds of comments help in this effort to draw more friends to our effort.”

I’ve been combing through the transcripts of the 2008 debates the past few days, and I noticed this remark as well. Romney was asked about his criticism of Obama’s remarks during a debate in August of 2007 by ABC’s George Stephanopoulos. In response, Romney rattled off a few really stale conservative talking points, but clarified that his objection was to Obama announcing his intentions, not to the idea of killing Bin Laden if the opportunity presented itself.

ROMNEY: Yes, I think Barack Obama is confused as to who are our friends and who are our enemies. In his first year, he wants to meet with Castro and Chavez and Assad, Ahmadinejad. Those are our enemies. Those are the world’s worst tyrants. And then he says he wants to unilaterally go in and potentially bomb a nation which is our friend. We’ve trying to strengthen Musharraf. We’re trying to strengthen the foundations of democracy and freedom in that country so that they will be able to reject the extremists. We’re working with them — we’re working with them…

STEPHANOPOULOS: But if your CIA director called them and said, “We had Osama bin Laden in our sights, Musharraf says no,” what do you do? (CROSSTALK)

ROMNEY: It’s wrong for a person running for the president of the United States to get on TV and say, “We’re going to go into your country unilaterally.” Of course, America always maintains our option to do whatever we think is in the best interests of America. But we don’t go out and say, “Ladies and gentlemen of Germany, if ever there was a problem in your country, we didn’t think you were doing the right thing, we reserve the right to come in and get them out.”

Romney isn’t exactly on solid ground demanding subtlety, since like other Republican hopefuls he’s recently taken to announcing his intentions to pursue covert action to topple the Iranian government. The progression of his views on the subject are really classic Romney: First he’s against it in principle, then he clarifies that he’s only against announcing that he’d do it while basically announcing he’d do it, and now he’s saying it’s a decision any president would have made. From abortion to health care to immigration to Iraq, Romney’s shifting positions on Bin Laden track with his tendency to adopt whatever position is most politically convenient at the time.

As to whether “any president” would have made the same decision, former Defense Secretary Robert Gates, who has served in intelligence and defense capacities under eight presidents, told 60 Minutes that “this is one of the most courageous calls, decisions that I think I’ve ever seen a president make. For all of the concerns that I’ve just been talking about. The uncertainty of the intelligence. The consequences of it going bad. The risk to the lives of the Americans involved. It was a very gutsy call.” (That quote is now part of the DNC’s web ad on the subject). If nothing else, this whole thing a reminder of how little the right-wing caricature of Obama has changed since 2007, and how far it is from the president Obama actually became.