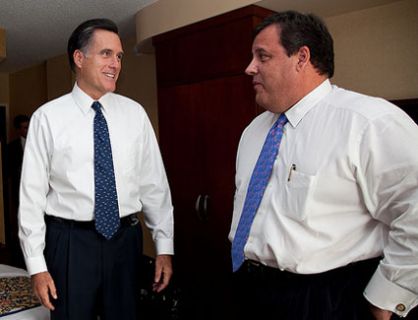 As Mitt Romney and Chris Christie took the stage Monday night at a private fundraiser in Parsippany, New Jersey, “Born to Run” by Bruce Springsteen blasted over the Hilton hotel’s loudspeakers. Like countless other native New Jerseyans, Christie self-describes as a fervent Springsteen fan. But whether the Boss himself—who famously rejected Ronald Reagan’s use of his music for political purposes in 1984, and who campaigned for Barack Obama in 2008—would have countenanced the song selection seemed dubious, especially given Springsteen’s open criticism of Christie’s policies.

Donors had been required to contribute a minimum of $500 for entry. Inside the event space, there was a full bar and buffet, including sliced ham, chicken stir-fry, filet mignon, and tortellini with pesto sauce. For patrons desiring access to a “VIP Photo Reception,” the cost was $2,500. A third option listed on a contribution form entailed raising $25,000 for Romney; those who did so would receive “membership on the ‘Host Committee,'” plus “one dinner reservation, one photo, and their names listed on the event invitation.”

Approximately 80 political figures from New Jersey—state party officials, senators, assemblymen, and county leaders—stood behind Christie as he spoke. All but a few were Caucasian. Christie announced support for Romney from 37 of 42 GOP state committee representatives, 14 of 16 GOP members of the senate, 27 of 33 GOP assemblymen, and former Republican Gov. Tom Kean. Local law enforcement officials were also in attendance; Michael F. Strada, the sheriff of Sussex County, told me that an aide to Christie had called his cell phone a few days prior to invite him.

“In addition to political support and prayers,” Christie continued, “we’re also ready to deliver tonight—because of the efforts of all of you and the people behind me—$1.1 million for the Romney campaign.”

“I admire President Obama for what he did,” said one Romney supporter.

He described receiving Romney this past January at Drumthwacket, the official governor’s residence in Princeton. “When we are ready to endorse a candidate, we will do it together, and we will do it in force,” Christie recounted telling him. (Never mind his own brief flirtation with a presidential run that followed this fall.) “And Gov. Romney, it took 11 months, but here we are.”

While the atmosphere among attendees was not generally one of adulation for Romney, some praised his business acumen and nuanced record—including on health care policy. “I understand the need to change your positions based on the dynamics in your state,” said Tony Cicatiello of Plainfield, New Jersey, a PR executive with ties to Gov. Kean. Indeed, Cicatiello said that he had no qualms about Romney’s health care program in Massachusetts.

He added: “I admire President Obama for what he did,” referring to Obama’s efforts to pass the Affordable Care Act, which Republican presidential candidates have made a primary target for attack.

Other middle-aged supporters in business attire declined to be interviewed as they waited at the contribution table. One man, who declined to give his name, said he’d just written a check for the maximum amount of $2,500; when I asked him where he was from, he replied, “God’s country.”

“Can you be more specific?”

Prior to Christie’s speech, New Jersey GOP Chair Samuel S. Raia had thanked the crowd for “standing in solidarity” with Christie, and by extension, Romney, who he projected would advance Christie’s agenda on a national level. Lt. Gov. Kim Guadagno had likewise urged attendees to “continue what you started in this room two years ago” by going all in for Mitt.

In his speech Christie suggested that the “constants” in Romney’s debate performances thus far were destined to be the “constants” of his presidency. “He is mature, he is intelligent, he is thoughtful, he’s earnest, he’s honest, and he has the integrity of his principles,” Christie said, in a possible swipe at front-runner Newt Gingrich.

When Romney took the podium, he began by acknowledging the presence of Woody Johnson, owner of the New York Jets and “my chair of my finance operation.” Back in January, Johnson had accompanied the candidate on a trip to Israel. After a summer trip to Romney’s lake house in New Hampshire and a dinner at Del Frisco’s steakhouse in New York, the Newark Star-Ledger reported, “Johnson was on board.”

“Thank you, Woody,” Romney said from the podium. “And go Jets.”

Romney pledged to deviate from typical campaign fare. “Instead of giving sort of a normal political address,” he said, “I just want to tell you a bit about why it is I fell in love with this country, and what it means to me.” Romney described a childhood trip to national parks throughout the United States, and his subsequent admiration of “the mountains, the canyons, the rivers, the sequoias.” He then recited a verse from the poem “The Coming American” by Sam Walter Foss:

Bring me men to match my mountains;

Bring me men to match my plains,—

Men with empires in their purpose,

And new eras in their brains.

Romney—who has a certain poetic talent of his own—has recited that same verse elsewhere on the campaign trail. At the conclusion of his speech, the song “Have a Nice Day,” by another local favorite, Bon Jovi, filled the room. As Romney shook hands and signed autographs along a rope line, I was able to ask him a quick question about Ron Paul, who according to the latest polls has a lead over Romney in Iowa. “Yeah, he’s got a good organization,” Romney responded. “I don’t know. I guess we’ll find out.”