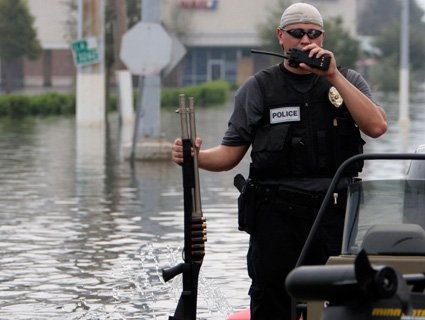 The New Orleans public defense system used to be famous. Or, more accurately, infamous: attorneys not showing up for trial or doing puzzles during hearings. A man convicted because his lawyer didn’t bother to track down the video that would have confirmed his alibi. Another man jailed for stealing $50 waiting more than 400 days to be interviewed by his court-appointed defender. Thanks in part to the Big Easy, Louisiana has the distinction of being the state with the highest rate of wrongful convictions and one of the highest reversal rates of capital convictions in the country. As one public defender cracks, “It’s no coincidence that a lot of the major Supreme Court criminal cases end with ‘v. Louisiana.'”

But that was before Katrina. “When the storm hit, it certainly did better than any lawsuit could have done to show the problem,” says Derwyn Bunton, the chief of the Orleans Public Defenders. Katrina demolished the city’s public defense system: The lawyers were funded by traffic fines, and there was no traffic anymore. Civil rights activists, lawyers, and the Justice Department stepped in, and by August 2007, a brand new OPD office was ready to do things differently.

The defenders work in an over-air-conditioned sprawl of rooms filled with worn furniture. Recent law school grads tread the stained carpet. In the reception area, there’s a large framed poster of three African Americans being fire-hosed in Birmingham in 1963. There’s also a printout of Mr. T saying he pities the fool who doesn’t understand how to properly operate the Super G3 laser fax machine. The old OPD office employed about 45 private attorneys as part-time contractors; nearly five years after the storm, there were 69 full-time public defenders. In Louisiana, district attorneys have 60 days to indict detained suspects for a felony. (New York City DAs get six days.) “And so what used to happen is you could sit, without a lawyer, that entire time,” explains Bunton, a bald, thick guy with an easy laugh who cut his teeth suing the state’s juvenile prisons for abuse. “We changed that. So when you get arrested there’s a lawyer. Somebody knows you’re in jail.”

“Their vigorous client-centered representation is such a dramatic contrast to the previous meet-’em-and-plead-’em system of days past,” says Sara Totonchi, executive director of the Southern Center for Human Rights. In 2006, the center published a damning report on the city’s indigent defense; in 2009, it gave OPD its prestigious Frederick Douglass Human Rights Award, calling it “an inspiration.”

Not that the new system doesn’t have its problems. Felony lawyers have about 150 open cases at any time. And though the city’s population has shrunk by 140,000 post-Katrina, the defenders say their caseload has doubled since the tough-on-crime DA, Leon Cannizzaro, started prosecuting cases at twice the rate of his predecessors. Plus, there’s Louisiana’s criminal-justice system, which might be described as…overactive. “We have more criminal legislation than any other state in the country,” Bunton asserts. For example: “We have theft of crawfish, which is a special crime. I’m not sure I don’t agree with that, because crawfish is delicious and needs to be protected.” Less humorously, the American Civil Liberties Union found that 82 percent of the state’s prisoners are in for nonviolent crimes and that its courts hand down life sentences at four times the national rate.

In order to keep up, OPD needs $12 million a year; in 2012, it will get only $9.5 million. The Justice Department grant has run out, and the cash-strapped state has cut its funding. New Orleans’ mayor has, for the first time ever, prioritized public defense in the budget, but that won’t cover the difference. After my visit, OPD cut nine lawyers and froze hiring. Bunton vows to continue to provide representation to anyone who needs it, though it’s unclear how his remaining staff will manage.

Despite the challenges, the overworked, underpaid defenders I met were an optimistic bunch—which is a good thing, since as long as voters elect prosecutors without ponying up to defend the suspects, they will get very little rest. A former client, Aubrey Anderson, beams about their dedication. “They really help if you want the help,” he tells me. He’s stopped by the office, as he often does, on his way back from his GED program to see his former lawyer, Lauren Boudreaux. He smiles gratefully when he describes how she got him into an intensive probation program instead of the life sentence he faced for breaking into an abandoned house. He says prison would have been hard for an illiterate paranoid schizophrenic homosexual habitual offender; when he was in jail, inmates cut him up and knocked out his teeth.

Anderson asks Boudreaux if she remembers the time she had to help him clear up a false positive on a probation-mandated drug test. “I remember,” she laughs. “I was on vacation, and I was getting phone calls at five in the morning on my cellphone, and it was you. But I’ll answer for Aubrey at five in the morning.”