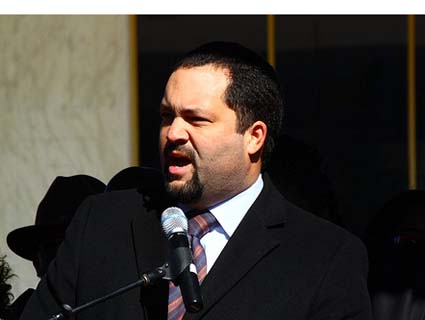 State-level voting restrictions are an attempt to suppress the minority vote and prevent them from exercising political influence, according to a report released by the NAACP and the NAACP Legal Defense Fund Monday.

“Jim Crow is poll taxes, James Crow Esquire it’s having to pay for an ID,” said NAACP Sr. Vice President for Policy and Advocacy Hilary Shelton on a conference call with reporters Monday. NAACP officials referred to the voting restrictions as “James Crow, Esq.,” so as to distinguish them from the violent tactics associated with enforcing Jim Crow segregation. “The intent seems to [be to] disenfranchise people of color disproportionately,” said NAACP President Benjamin Jealous.

The report exhaustively details how 25 states have passed laws restricting voting rights, either by requiring photo identification or proof of citizenship at the polls, limiting early voting, passing stricter absentee ballot requirements, curbing third-party voter registration drives and venues for registration, implementing stricter felony disenfranchisement laws, and imposing residency requirements that make it harder for people to register to vote after they’ve moved. The Brennan Center has estimated that stricter voting requirements could make it harder for five million eligible voters to cast ballots. While Republicans have argued such rules are necessary to combat “voter fraud,” examples of the kind of in-person voter fraud that might be curbed by such requirements are miniscule.

All of these new restrictions disproportionately impact the poor and minorities, the NAACP report states, and that’s by design. While the report does not blame Republicans directly, it describes the restrictions as a “backlash” against an empowered minority vote in 2008 when the participation gap between eligible black and white voters was nearly eliminated. Echoing Ari Berman’s* reporting for Rolling Stone, NAACP officials on the call singled out the American Legislative Exchange Council as the source of legislation implementing restrictions on voting.

“We are experiencing an assault on voting rights this year, that is disturbing in its scope and intensity,” said NAACP LDF Director of Political Participation Ryan Haygood. “It’s not a mistake that the very channels through which many voters of color showed up at the polls at 2008 are” the ones being blocked, he added. In fairness, the laws are likely also the result of a 2008 Supreme Court decision upholding a strict voter ID law in Indiana despite evidence that it would disproportionately disenfranchise minorities.

The NAACP and NAACP LDF aren’t the first to draw comparisons between Jim Crow-era voter restrictions and today’s vote fraud push by conservatives. Democratic National Committee Chair Debbie Wasserman-Schultz caused a firestorm last June when she said that Republicans were trying to “literally drag us all the way back to Jim Crow laws” with stricter voting requirements.

“The interest is not [what’s in] their heart, it’s their policy,” said Rev. William Barber, President of the NAACP North Carolina State Conference. “If they implement these policies, and they know who these policies are going to impact, it is disparate racial treatment.”

Shelton was more blunt. “It’s more sophisticated, but it really is the same old strategy being played out yet again.”

*A previous version of this piece referred to the author of the Rolling Stone piece as Ari Melber; it was Ari Berman.