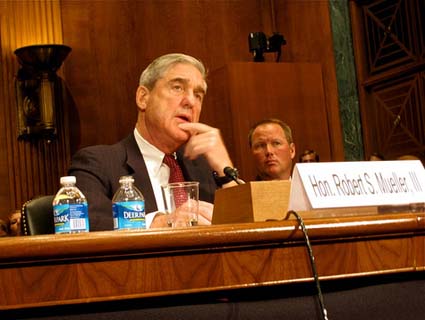 “The drafters of the statute went some distance to resolving the issue related to our authority but the language, but did not really fully address my concerns…,” Mueller said during questioning by Sen. Dianne Feinstein (D-Calif.), who opposes the detainee-related language in the bill. “I was satisfied with part of it with regard to the authority, I still have concerns and uncertainties that are raised by the statute.”

Mueller said he fears that the legislation would muddle the roles of the FBI and the military.

The bill “talks about not interrupting interrogations, which is good, but gaining cooperation is something different than continuing an interrogation,” Mueller said. “My concern is that…you don’t want to have FBI and military showing up at the scene at the same time on a covered person [under the law], or with a covered person there may be some uncovered persons there, with some uncertainty as to who has the role and who’s going to do what.”

Mueller’s statement reflects the concerns about a potential turf war between the FBI and the military that the ACLU’s Chris Anders raised yesterday in relation to the revised NDAA.

On Tuesday, White House Press Secretary Jay Carney repeated to reporters the administration’s prior statement that “any bill that challenges or constrains the president’s critical authorities to collect intelligence, incapacitate dangerous terrorists, and protect the nation would” provoke a veto. For his part, Mueller seems to be saying here that the NDAA’s detention provisions do just that.

It’s hard to see how Mueller’s remarks don’t lock the administration into a veto. If for some reason President Obama ultimately doesn’t veto after claiming he would, then Congress won’t have much reason to take his veto threats seriously in the future.