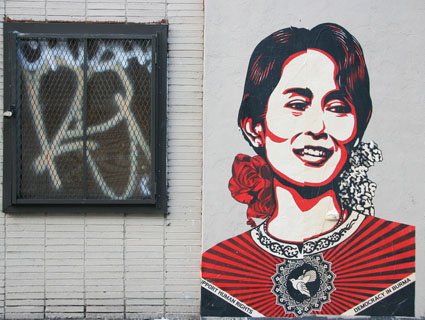 This past month, I was on a sort of sneaky assignment and then out of the country, and in my absence there have been some huge developments in US-Burma relations. For the first time in 50 years, an American secretary of state dropped in on the nation that generally receives little more high-level American acknowledgment beyond passing negs about tyranny in presidential speeches. As Mother Jones‘ resident Burmaphile, I got an email from one of the editors last week asking the all-important question about Hillary Clinton’s making nice and supposedly making headway with the intractable regime: “Is this for real?”

If Washington is assuming that Burma’s recent (bullshit) elections and the release of its most famous political prisoner means that we can lead the country into a future awash in democracy and rainbows, that would be a little too lovely to be believed. But that the Obama administration is cautiously optimistic, or that it senses wee little steps toward progress, and that there’s an opportunity for the United States to get involved and nudge it along? Yeah. Maybe.

For decades, our policy has been to sanction Burma and wag our finger at it. I’ve long been a proponent of more engagement with the country. Though nobody wants to look like they’re befriending bad guys, and there’s no proof that getting more involved with Burma will work, there is proof of one thing: That the policy we’ve been pursuing so far does not work. Our sanctions are meaningless, because a) lots of other countries are happy to buy the Burmese resources we won’t; b) the goods we sanction can still make it to us via roads like smuggling; and c) there are loopholes in our sanctions that still allow Chevron to operate there and make the regime big money.

We’re not lifting the sanctions yet—and, for the aforementioned reasons, I kind of doubt Burma really cares—but we are starting assistance to programs that deliver health care, microlending, English instruction, and help for land mine victims. Regardless of whether you’re of the school of thought that aid to corrupt/underdeveloped nations is enabling/infantilizing, this aid at least has the possibility of creating leverage, like the kind the United States and Germany wielded against Uganda when it proposed killing gay people. It’s a long, long road to reconciling of Burma’s problems, like, say, the systematic government-perpetrated rape and torture and ethnic cleansing going on its borderlands, issues Clinton says she “raised directly with the government” on her trip. That mention over lunch is unlikely to save lives. But what past administrations have said to Burma is, “Hey, not that there’s any reason for you to listen, because we give you/cooperate with you on absolutely nothing, and you’re dead to us. But: In our opinion, you should stop slaughtering people.” Moving forward, the conversation might be a little more compelling when it sounds like, “Hey, stop slaughtering people. We give you money.”

Burma has long been run by assholes. It remains to be seen whether the president and parliamentarians put in power by the elections are as big of assholes as the assholes who led before them. And at the very least, the Burmese people will be getting the chance for more medicine and education and microloans. It can’t hurt for trying to befriend Burma and empower the population. The former has a shot, and let’s definitely hear it for the latter. I’m not necessarily given to bouts of optimism, even the cautious kind, but if there’s anything we were reminded of this year, it’s that an empowered population is the the best tool of all against repressive regimes.