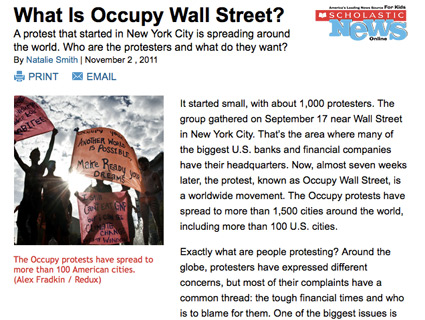 Scholastic, the educational publishing giant, has come under fire this week for including a story about the Occupy Wall Street protests in its Scholastic News magazine, which is distributed to school kids in classrooms around the country. WorldNetDaily, the conservative online news outlet that’s committed itself to watchdogging such things, ran a story this week suggesting that Scholastic was trying to indoctrinate innocent school kids with George Soros-style liberalism. In a piece headlined “4th-graders Brainwashed with Occupy ‘Propaganda,” WND tells the story of a parent, identified only by his first name, who’s outraged that his child came home from school with a copy of Scholastic News that included an article called, “What is Occupy Wall Street?”

According to WND, “Edward,” the parent, complained about the article to Scholastic, saying “I grew up in Soviet Union and seeing your propaganda about Occupy Wall Street brings back my memories.”

Offending passages included those mentioning that the protesters had a beef with big companies making too much money as millions of Americans struggle with unemployment and foreclosure. But WND sees much more of a conspiracy in what Scholastic left out: any mention of the alleged anti-Semitism in the movement or the “rampant crime that has been documented at various Occupy protest sites, the filthy conditions left behind by some protest groups, the violence and the incidents of intimidation against even children, as has been reported.” WND also complained that Scholastic hadn’t mentioned OWS’s (largely fictional) Soros funding.

Judging from the story, Scholastic didn’t take these complaints very seriously. They are probably used to getting hammered by WND, which has been a vigilant watchdog when it comes to anything untoward creeping into textbooks and other materials in public schools, especially if it happens to involve Muslims. A few year back, WND jumped all over Scholastic for running a story about madrassas in Pakistan in its Junior Scholastic news magazine. WND accused the publisher of “promoting” Islam to American students by explaining to them what life was like inside an Islamic school. Scholastic, to its credit, told WND that it would cover virtually any subject that came up in current events that was likely to be addressed in the classroom—including Occupy Wall Street, apparently.