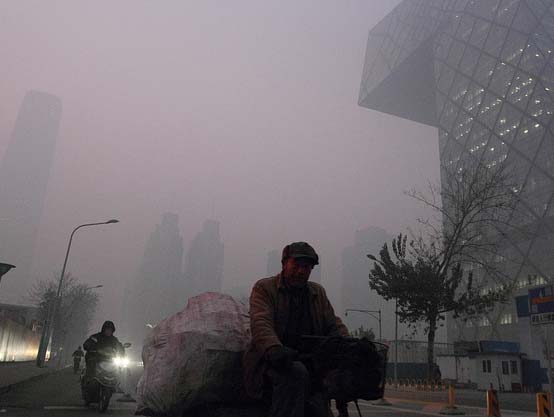 Back in 2008, the Chinese government went to great lengths to improve the air quality in famously smoggy Beijing in time for the Olympics. For months in advance of the games, the city’s motorists were only allowed to drive on certain days, and more than 300,000 of the most polluting vehicles were taken off the road entirely. The results, everyone thought, were impressive: A 2009 study found that the measures had reduced pollution by half.

But hold your applause: A newer study, released Tuesday, found that favorable weather conditions—rain at the start and wind during the games—played just as much of a role in the clean-up as emissions controls. A team of researchers at the Department of Energy’s Pacific Northwest National Laboratory used models to analyze weather and smog conditions in the weeks leading up to the games, as well as during and after. They confirmed that the pollution during the games was about half as bad as usual. But they also found that strong storms were responsible for half of the overall smog reduction. In a PNNL press release, a lead scientist on the study said Beijing officials were “lucky” that the weather cooperated.

The researchers also found that the pollution didn’t just disappear when it was blown out of Beijing; rather, it moved to an area about 50 miles south of the city. It would have helped if the government had extended its strict emissions rules out beyond city limits, said the PNNL scientst. But considering just how grave Beijing’s smog situation has become in recent months, it’s pretty clear that the city and its environs are in need of much more than a quick pre-game clean-up. For a video of commuting in Beijing that will make your lungs hurt just to watch, click here.