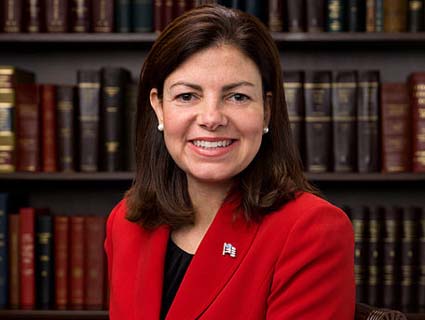 Repealing restrictions on torture: It’s the moderate, centrist thing to do.

On Wednesday afternoon, Senator Kelly Ayotte (R-N.H.) took to the Senate floor to defend her amendment revoking President Obama’s 2009 executive order restricting American interrogators to the techniques outlined in the Army Field Manual.  “Our amendment in no way condones or authorizes torture,” Ayotte said, insisting the secret annex to the Army Field Manual her amendment would have created would still have abided by domestic and international prohibitions against torture. Ayotte also said that interrogations were being undermined by the fact that the Army Field Manual on interrogation is available on the Internet. we’re just telegraphing to our enemies that we’re going to use.”

But as Ayotte tried to rebut criticisms that her amendment would open the door to torturous interrogation techniques, she engaged in a conversation with the amendment’s co-sponsors that undermined her argument.

“When a member of Al Qaeda or a similar associated terrorist group, I want to them to be terrified about what’s going to happen to them in American custody,” said Senator Joe Lieberman (I-Conn.), explaining his support for the amendment. “I want them not to know what’s going to happen, I want that the terror that they inflict on others to be felt by them as a result of the uncertainty that they can look on the Internet and know exactly what our interrogators are limited to.” In an exchange with Senator Lindsey Graham (R-S.C.), Ayotte acknowledged that part of her goal was to reauthorize some Bush-era “enhanced interrogation techniques” other than waterboarding.

Ayotte’s amendment looked dead as of yesterday afternoon, but the very premise of the amendment was flawed, anyway. The presence of the Army Field Manual online doesn’t mean that Al Qaeda members will be able to resist interrogation.

“There are no two interrogations that are the same,” says Ali Soufan, a former FBI interrogator who has criticized the use of torture. “If you know exactly what you’re doing as an interrogator, it’s next to impossible to prepare for it.”

Soufan adds that it’s unlikely a hardened Al Qaeda terrorist is going to be intimidated by the fact that some interrogation techniques would be secret. “Even if you want to do an EIT [enhanced interrogation techniques]-light, from nudity to waterboarding and everything in between, it’s a joke compared to what these guys are expecting to face in the Middle East,” he explains. “They’re going to call the bluff anyway. It didn’t work with the EITs, it’s not going to work with the EIT light.”

There’s another problem with believing secret techniques will strike fear into the hearts of terrorists.

“You can’t have a prisoner believe he’s going to be tortured in US custody without a villager in Afghanistan believing the same thing,” says Devon Chaffee, a legislative counsel with the ACLU. “You can’t have it both ways. Either we are letting the world believe that we terrorize and torture or prisoners, or we make clear to the world that we adhere to the rule of law.”

UPDATE: Ayotte’s amendment relating to interrogations wasn’t voted on yesterday, and Chaffee says that “If it’s not included in either of the base bills that go to conference, it would seem very unlikely that it would be inlcuded in a conference bill.” Ayotte withdrew a seperate amendment proposed by Ayotte requiring notifiying Congress when al Qaeda related detainees are in custody, but it may ultimately still be part of the bill. (I previously stated incorrectly that the interrogation amendment had been withdrawn. It was rejected as not germane by the parliamentarian, which makes it unlikely it’ll be in the final bill.)