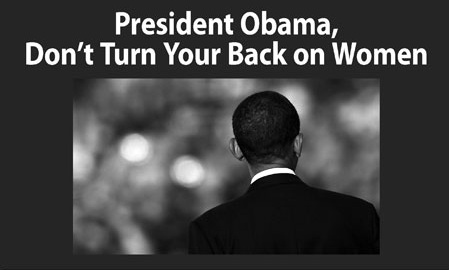 Catholics for Choice ad in the <em>New York Times</em>.

Reproductive rights activists are upping pressure on the Obama administration not to grant major exceptions to the new policy requiring health insurers to cover birth control. Religious groups—particularly the US Conference of Catholic Bishops—have been pressuring the administration to let a wide range of institutions out of covering birth control if they have religious or moral objections.

Fears are high that the Obama administration might allow not only churches, but any hospital, health clinic, or university that is associated with a religious group have an exemption to the new policy. It’s not surprising that the bishops and others are lobbying for this exemption; groups that oppose contraception flipped out when the National Academy of Sciences recommended offering no-cost birth control as part of preventative care for women. They were certainly nonplussed when the Obama administration decided to require insurers to cover it. But the outrage is over the fact that the Obama administration appears to be actively considering it—and could make an announcement as soon as this week.

The push back has come from Democrats in Congress—particularly the –as well as groups like NARAL Pro-Choice America, Planned Parenthood, and the Feminist Majority Foundation, which are running online petitions to the White House.

Not even all Catholics are excited about the move. Catholics for Choice took out an advertisement in Monday’s New York Times calling on Obama to to reject the call to expand the refusal clause. Their ad highlighted the fact many Catholic women use birth control for contraception, and women in general use it for a number of reasons that have nothing to do with sex.

It’s also worth noting, as this piece from Jezebel about Fordham University points out, some Catholic colleges already refuse to provide birth control to students.