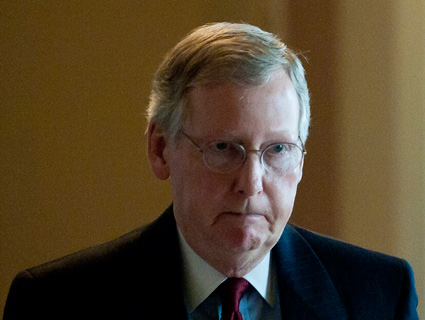 "In all likelihood we will agree to continue the current payroll tax relief for another year," Senate Minority Leader Mitch McConnell said Tuesday.Pete Marovich/Zuma

Late on Tuesday, the Wall Street Journal‘s Naftali Bendavid reported that Republicans will back a Democratic plan to extend the payroll tax cut that President Barack Obama signed into law as part of last year’s tax compromise. (Republicans, as you’ll recall, got the extension of the Bush tax cuts for the rich and a more generous deal on the estate tax; Democrats got the payroll tax cut, unemployment insurance, a college-tuition tax credit, and expanded business tax credits, among other things.) Prominent Republicans had voiced strong opposition to the measure, reserving special spite for Senate Majority Leader Harry Reid’s plan to pay for the tax break by hiking taxes on millionaires.

In response, the editors of the conservative National Review outed themselves as payroll tax cut fan boys. It’s not particularly interesting that the National Review‘s editorial board wants to keep taxes low. What is interesting is how the magazine’s editors craft their argument: by debunking several of the GOP’s most prominent objections to the cut, including the notion that temporary tax cuts have little economic impact and that a reduction in revenue from payroll taxes, which fund Social Security, will further erode the program’s finances.

But the editors save their special sauce for Republicans’ third objection—that the payroll-tax cut doesn’t create jobs:

Here again holdout Republicans have a double standard, demanding that this tax cut pass a rigorous empirical test that they never apply to other tax cuts. It stands to reason that the tax cut makes hiring more attractive to employers—only marginally more attractive, to be sure, but it is on the margin that we seek beneficial effects from improvements to tax policy. And there may be ways to make the tax cut more effective, such as applying it to the employer’s share of the payroll tax rather than the employee’s.

Of course, the editors of the National Review wouldn’t be the editors of the National Review if they didn’t come around to defending the job creators that really count: the rich. They wind down their op-ed with an entreaty to Republicans to maintain their vigilant stand against any tax cut that’s paid for by a permanent tax increase on the super rich.

But National Review‘s critique of the GOP’s intransigence on the Democrats’ payroll tax cut extension—which will add another $250 billion to the deficit unless offset by cuts or tax increases—is incomplete. The editors slam the GOP for rejecting the extension, then fail to offer up any viable pay-fors. Republicans know how desperate President Obama is to juice the economy, and that his options for doing so are few. Extending the payroll tax cut was one of the few courses of action he felt the GOP would support.

Given how badly Obama wants the extension, Republicans also know that all they have to do is wait him out and continue to refuse, politely, to raise other taxes to pay for the extension. Let’s face it: we’ve seen this movie before. Republicans will extract another round of painful concessions on social spending from Democrats in order to pay for the payroll tax cut. In other words, the National Review is doing its part to move Republicans closer to a compromise that’ll never happen on the Democrats’ terms.