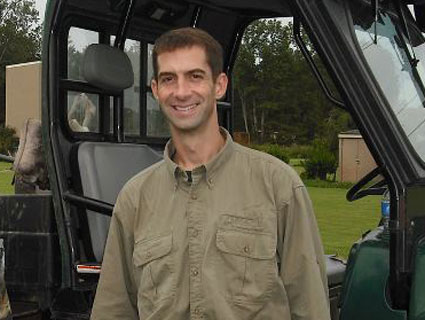 GOP congressional candidate Tom Cotton has a past as a prominent critic of the New York Times.<a href="http://www.facebook.com/cottonforcongress">Tom Cotton for Congress</a>

UPDATE: On May 22, 2012, Cotton won the GOP nomination in Arkansas’ 4th congressional district. On November 6, he won the general election. Then, on July 31, 2013, he announced he will run for the Senate seat currently held by Democrat Mark Pryor.

In 2006, Tom Cotton, a twentysomething US Army lieutenant serving in Iraq, wrote an open letter calling for the prosecution and imprisonment of two of the New York Times‘ most prominent reporters, Eric Lichtblau and James Risen, who had just broken a major story about how the government was tracking terrorist financing. The letter, which also called for the prosecution of Bill Keller, the Times‘ then-executive editor, was initially published on the conservative blog PowerLine but soon went viral.

Now, half a decade later, Cotton is running for Congress as a Republican. He has a good chance of winning. Mike Ross, the Democratic incumbent in Arkansas’ 4th District, is retiring, and Cotton has earned solid establishment support (and a fawning Weekly Standard profile) in his race for the GOP nomination. So far, Cotton’s past as an internet meme-generator and amateur media critic has gone largely unnoticed.

Five years ago, however, Cotton’s criticism of the Gray Lady made him into a minor celebrity in the right-wing blogosphere. On June 22, 2006, Lichtblau and Risen published an article revealing the details of a top-secret Treasury Department program to disrupt terrorists’ finances—The Terrorist Finance Tracking Program, also known as the SWIFT program for the financial transactions database on which it relied. Two months earlier, the pair had won the Pulitzer Prize for their stories disclosing other secret Bush administration programs, including the National Security Agency’s warrantless wiretapping.

Conservatives were outraged by the Times‘ reporting—even though the Los Angeles Times, the Wall Street Journal, and the Washington Post reported very similar stories the same day. Vice President Dick Cheney complained about the Times‘ Pulitzer, and Rep. Peter King (R-N.Y.) called the paper “treasonous,” as did Sen. Jim Bunning (R-Ky.). Rep. J.D. Hayworth (R-Ariz.) wrote a letter to the speaker of the House calling for the Times congressional press passes to be withdrawn, and the Weekly Standard‘s Heather MacDonald led an article with the claim that “The New York Times is a national security threat.” Ann Coulter said the Times‘ staff should be “executed.” Even President Bush weighed in, calling the paper’s decision to publish “disgraceful.”

“Gosh, we’re hated,” wrote the Times‘ Nick Kristof. (Howard Kurtz, then of the Post, had a great column on all this at the time, and Media Matters compiled a good summary of some of the other conservative reactions to Lichtblau and Risen’s story.)

But few of the right’s complaints about the Times‘ story got more traction—or struck more of a chord—than Cotton’s letter. At the time, the PowerLine blog was riding high on its 2004 takedown of CBS anchor Dan Rather, and Cotton’s piece received widespread circulation. Several papers reprinted the letter in full. Right-wing talker Hugh Hewitt mentioned it on CNN’s Reliable Sources, complaining that the Times hadn’t responded, and the Washington Times highlighted Cotton’s argument in a story on the controversy.

Here’s an excerpt from the letter:

You may think you have done a public service, but you have gravely endangered the lives of my soldiers and all other soldiers and innocent Iraqis here. Next time I hear that familiar explosion—or next time I feel it—I will wonder whether we could have stopped that bomb had you not instructed terrorists how to evade our financial surveillance.

And, by the way, having graduated from Harvard Law and practiced with a federal appellate judge and two Washington law firms before becoming an infantry officer, I am well-versed in the espionage laws relevant to this story and others—laws you have plainly violated. I hope that my colleagues at the Department of Justice match the courage of my soldiers here and prosecute you and your newspaper to the fullest extent of the law. By the time we return home, maybe you will be in your rightful place: not at the Pulitzer announcements, but behind bars.

Outside experts are skeptical of the idea of prosecuting journalists for publishing secrets. “The espionage act has never been used against journalists,” explains Jay Rosen, a journalism professor at New York University. “When you accuse investigative journalists of espionage, you are essentially saying that they’re working for another power, or aiding the enemy. That is culture war tactics taken to an extreme.”

Lichtblau and Risen were never, of course, charged with espionage. But the Times took the controversy seriously enough that Keller penned a lengthy op-ed explaining how the paper made decisions about publishing secrets. In the piece, Keller noted that in September 2003 Treasury Secretary John Snow—one of the GOPers who had complained about the Times story—had invited reporters from the Times and other papers on a “six-day tour to show off the department’s efforts to track terrorist financing.” Keller’s implication was clear: The conservative attack on the Times‘ reporting was insincere and opportunistic.*

Keller declined to comment for this story. “I’ve said my piece more than once on the Swift story and on the notion of using the Espionage Act against journalists,” he wrote in an email. But Lichtblau sent this response:

The same First Amendment freedoms that allowed Lt. Cotton to put out his letter allowed us to publish our story on the SWIFT program, a decision that the newspaper’s top editors did not make lightly. Our story clearly concerned a matter of great public interest that went to the heart of the debate over national security versus civil liberties, and there was no evidence at the time the story was published in 2006, or in the five years since, that it endangered American lives.

“Tom speaks his mind on topics about which he’s passionate—including the Times‘ disclosures of highly classified national security matters,” a spokesman for Cotton’s campaign said Wednesday. “Tom is confident that the Times will respect his rights of free speech and cover his campaign in a fair manner consistent with journalistic ethics.”

Steven Aftergood, an expert in government secrecy at the Federation of American Scientists, says he doesn’t necessarily agree with the Times‘ decision to publish but that Cotton’s legal judgment is lacking. “Should the Times have been indicted and prosecuted? Of course not,” Aftergood said, laughing. “To believe in the free press means to allow for the exercise of editorial judgment. If you want to say people cannot choose to publish such information, then you don’t believe in a free press.”

“Advising voters what to do about” Cotton’s history with the First Amendment “would not be my place,” Rosen says. “But should this be part of the public record? Absolutely.”

*The drama didn’t end there, however. In October 2006, the Times‘ public editor, Byron Calame, wrote a column retracting his earlier support for publishing the TFTP story. Keller fired back the next month, slamming Calame’s “revisionist epiphany” in a letter.

Correction: An earlier version of this story incorrectly stated that Eric Lichtblau and James Risen were awarded their Pulitzer Prize in 2006 after their story on the Terrorist Finance Tracking Program was published. The Pulitzer winners were actually announced about two months earlier. The sentence has been corrected.