God is everywhere—even K Street. According to a new study from the Pew Research Center’s Forum on Religion & Public Life, the number of organizations involved in religious lobbying or religion-related advocacy has increased nearly fivefold since 1970. At least 1,000 people work to extend God’s influence in Washington, spending at least $390 million a year in the process.

Whose God has the most pull on Capitol Hill? It’s unclear: roughly a fifth of the religious advocacy organizations in Washington push issues of concern to the Roman Catholic community, while a similar proportion represent evangelical Protestant interests; 12% are Jewish. And the heavy hitters cover a pretty broad range of religious persuasions: 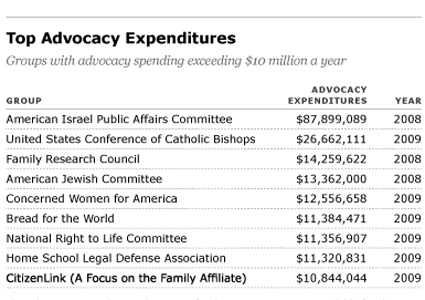 Federal lobbying laws could be allowing some of these groups to avoid full disclosure of their advocacy work. Only 10 of the groups surveyed by Pew are registered as 501(c)(4)s, which are allowed to engage in a limited amount of lobbying. Over 80 percent of the groups are registered as nonprofit, tax-exempt 501(c)(3)s. Under that designation, they’re not allowed to devote a “substantial” share of their activity to lobbying. (Twenty-six groups are 501(c)(3)s that have a partner group registered as a 501(c)(4), or vice versa.)

What qualifies as “substantial” activity devoted to lobbying? According to federal law, religious institutions must disclose their lobbying if more than 20 percent of an employee’s income is from direct lobbying on behalf of that institution. If a religious group hires an outside firm to do its lobbying, that firm must disclose that it has lobbied on behalf of a religious institution. But the 20 percent rule is rarely enforced, according to the Center for Responsive Politics (CRP).

CRP also found that during the first three quarters of 2011, 23 religious groups hired 68 new lobbyists and spent a combined $1.7 million. The upshot: with hot-button social issues like reproductive rights and Planned Parenthood funding atop the agenda for Republican lawmakers in Washington, expect these numbers to continue to rise.