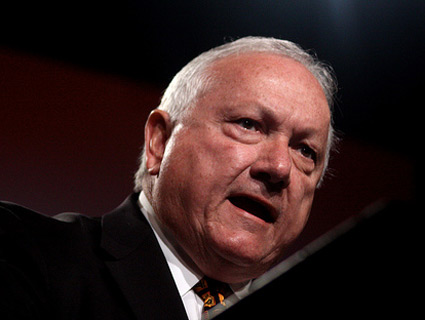 Republican Arizona state Sen. Russell Pearce, the architect of the state’s draconian anti-immigrantion law, may lose his seat in tomorrow’s recall election. According to a poll by a local ABC affiliate, Pearce is running neck-and-neck with his Republican challenger Jerry Lewis:

Lewis holds a 46-43 percent lead over Pearce in the historic recall contest, but the edge is within the poll’s margin of error.

“Statistically here, what we’ve got is a dead heat,” said Jeremy Moreland, a Valley pollster who conducted the survey. “Both Lewis and Pearce are within the margin of error of one another.”

Pearce has a considerable financial advantage. According to the ABC affiliate, Pearce “raised an eye-popping $230,000—including donations from more than 40 states—compared to Lewis’ $69,000.” Yet despite that advantage, and the fact that his campaign managed to get a sham candidate, Olivia Cortes, on the ballot, Pearce may still lose.

Pearce’s opponents challenged Cortes’ candidacy in court and Maricopa County Judge Edward Burke wrote in his ruling that that Cortes was recruited by Pearce allies “to siphon Hispanic votes from Lewis to advance Pearce’s recall-election bid.” Nevertheless, Burke ruled that Cortes could stay on the ballot, because “he could find no wrongdoing by Cortes herself.” According to the ABC-15 poll, Cortes is still polling at about 2.5 percent, which in an election this close could mean the difference between Pearce keeping or losing his seat. In one last desperate attempt to swing the election in Pearce’s favor, his allies are behind a misleading robocall in an effort to manipulate voters into casting a ballot for Cortes.

Pearce, who drafted the 2010 law after meeting with officials from the American Legislative Exchange Council and Corrections Corporation of America, the private prison company, became state Senate president following Republican gains in the 2010 elections. But despite his rise in political stature, his anti-immigrant agenda met with more resistance than expected, and he was recently implicated by an investigation that showed him and other Arizona lawmakers illegally accepting Fiesta Bowl tickets.

While Pearce’s odd ability to “accidentally” associate with white supremacists didn’t stop him from rising to state senate president in Arizona, his Republican opponent has taken a moderate stance on immigration, saying during their debate a few weeks ago that “we need to make sure we address this issue in a humane way.” So it’s not just that Pearce might lose. It’s that the state’s most anti-immigrant politician might be defeated by the kind of Republican moderate on immigration that, back in 2010, seemed almost extinct.