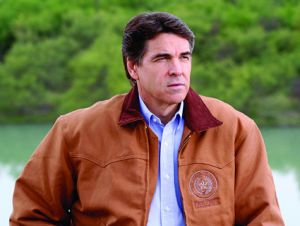 America had a good laugh at Rick Perry’s expense on Tuesday after the Texas Governor told students at St. Anselm College in New Hampshire to vote for him next November—but only if they’re over 21. Zut alors! Le gaffe! The federal voting age is 18, not 21; 21 is the legal drinking age. Perry also managed to get the date of the election wrong.

But maybe he had a point. In Perry’s Texas, as in various states across the country, Republicans have made a concerted push over the last half decade to make it harder and harder for certain Democratic-leaning constituencies—namely young people, senior citizens, and minorities—to vote. It’s an attempt to suppress voter turnout in the name of cracking down on voter fraud (Ari Berman can explain it all for you).

Texas’ new voter I.D. law, signed into law by Perry this summer, is a great example of that strategy. The law accepts concealed handgun license permits as a valid form of identification, but not student identification cards issued by state universities. The Department of Justice has blocked implementation of the law out of concerns that it discriminates against specific groups:

Democrats countered that there is no evidence of voter impersonation in Texas and that the bill simply was an effort to make voting more difficult for low-income Texas, students and the elderly, who typically vote for Democrats.

The new law would require voters to show a Texas driver’s license, a Texas concealed handgun license, a U.S. passport, citizenship papers, or a military identification card before they could cast a ballot.

Really, Perry’s gaffe was that he asked college students to vote.