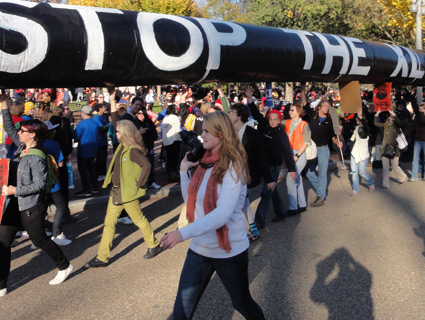 There was some confusion on Tuesday after news from Nebraska indicated that the state and TransCanada had come to an agreement on rerouting the proposed Keystone XL pipeline around the environmentally sensitive sand hills region.

Some of the initial reporting made it sound like this meant that the pipeline was now a done deal; after some delay, it would probably go forward. This would have been a bit of a let down for enviros who were celebrating last week after the Obama administration announced that it would delay a final decision on the pipeline for further evaluation. But even if Nebraska and TransCanada agree on a new route, it still has to go through the State Department. A spokesperson writes via email:

Nothing has changed with regard to presidential permit process on the way forward on the proposed Keystone XL pipeline project. Everything the Department said Thursday with regard to process and timing holds true.

This process requires a supplemental Environmental Impact Statement for the new proposed routes and given the process, we cannot provide a specific end-date, other than to say, as we did last Thursday, that based on previous assessments of similar distance, we anticipate the evaluation could conclude as early as first quarter of 2013.

A delay until 2013 doesn’t mean Keystone XL will never be completed. It could just mean that a second-term Obama administration, or a first-term Romney-Perry or Hermanewt Caingrich administration, approves it. Nor does a reroute solve all of the environmental problems with the project. It might mean the sand hills are protected, but there is a long list of other reasons enviros don’t like the 1,661-mile proposed pipeline. And even the Keystone XL does get the axe entirely, Canadian oil companies are already looking for other means of exporting that oil.