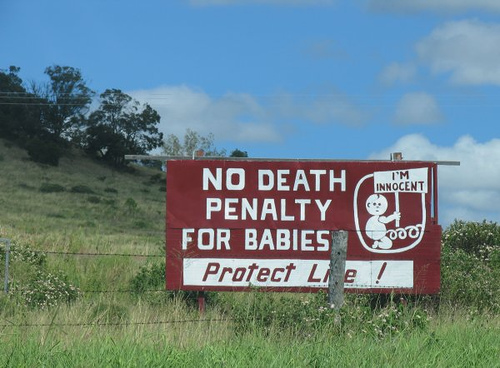 Mississippi’s “Personhood” amendment, which would redefine life as beginning at fertilization, may well pass when it goes to a vote on Tuesday. Public Policy Polling finds that 45 percent of voters in the state support the amendment, while 44 percent are opposed.

The poll found that men (48 percent), whites (54 percent), and Republicans (65 percent) show the strongest support for the proposal. The measure has received backing from Mississippi politicians on both sides of the aisle, including both the Republican and Democratic candidates for governor. The state’s current governor, Republican Haley Barbour, first expressed some apprehension about the measure, but then voted for it when he sent in his absentee ballot last week (he’ll be out of town on Election Day).

This is by far the most extreme anti-abortion law under consideration in the US. It would not only ban all abortions, even in cases of rape or incest, but would also outlaw many forms of birth control and in-vitro fertilization.

Les Riley, the director of Personhood Mississippi, says the measure’s not just about redefining the very concept of when human life begins. He also hopes it may help convert more Mississippians to Christianity—even those who vote against it.

Riley is certainly correct, however, in his statement that, if it’s approved, this “will be the first time in history that a state has recognized the humanity of the unborn and their God-given right to life.” When similar measure was on the ballot in Colorado for (for a second time) last year, voters rejected it by a 3 to 1 margin.