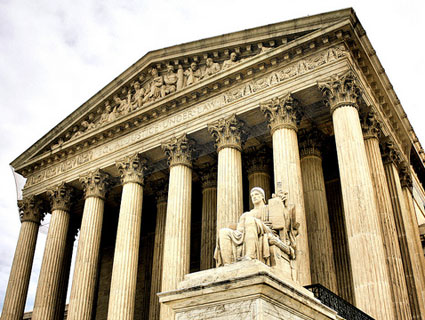 The United States Supreme Court is set to rule on health care reform before the 2012 election.<a href="http://www.flickr.com/photos/tabor-roeder/5554047867/sizes/z/in/photostream/">Phil Roeder</a>/Flickr

The Supreme Court announced on Monday that it would hear a challenge to the constitutionality of the Affordable Care Act (ACA), either vindicating or dealing a death blow to the Obama administration’s signature domestic policy accomplishment before the 2012 election. Or there’s a third option: The court could kick the can down the road.

The “punting” option was laid out by Judge Brett Kavanaugh*, George W. Bush appointee, in the most recent ruling by the US Court of Appeals for the DC Circuit, which upheld the constitutionality of the law. In his dissent, Cavanaugh declined to address the merits of the Affordable Care Act, arguing instead that a law called the Tax Anti-Injunction Act prevents the courts from ruling on the issue until someone has actually been forced to pay the penalty for not purchasing health care. The act basically stipulates that in order to challenge a tax an individual must be forced to pay it first.

“The most obvious way they could delay getting to the merits of the ACA would be to find that they don’t have jurisdiction under the Tax Anti-Injunction Act,” explains Elizabeth Wydra, chief counsel for the Constitutional Accountability Center. Since the mandate doesn’t take effect until 2014, and Americans without health coverage wouldn’t have to pay a penalty until they file their tax returns in 2015, it could be years before the Supreme Court actually decides the case. As Lyle Denniston writes at SCOTUSBlog, the court has already set aside one of the five and half hours scheduled for oral arguments to address the issues raised by the Tax Anti-Injunction Act.

That doesn’t mean however, that the court is necessarily going to punt. Before the court decides the case, “it first has to determine whether the case is properly before them,” Wydra says, so “they’d have to address [the Tax Anti-Injunction Act], even if the parties agree it doesn’t apply as they do in this case.”

Nevertheless, if the justices conclude that they don’t want to rule on a highly contentious matter with significant political ramifications mere months before a presidential election, the court has a clear path to avoid doing so.

*A previous version of this post incorrectly spelled Kavanaugh’s last name with a “c” instead of a “k.”