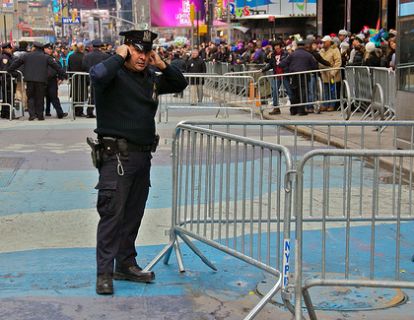 Once a novelty to most observers, the hand signals and protest-speak of Occupy Wall Street now seem like old hat to anyone following along at home. But the recent uptick in heavy-handed police tactics at Occupy protests has given rise to a new slew of phrases to decipher. “Kettling” may sound cozy, and “frozen zone” like a delightful summertime treat, but neither is much fun. Here’s a guide to some lesser-known procedural phrases we’ve come across. (You can add your own in the comments.)

Frozen Zone
As MoJo’s Josh Harkinson first reported, this phrase was used by an NYPD officer to describe the November 15 raid on Zuccotti Park:

“Can I help you?” an burly officer asked me, his helpfulness belied by his scowl.
“I’m a reporter,” I told him.
“This is a frozen zone, alright?” he said, using a term I’d never heard before. “Just like them, you have to leave the area. If you do not, you will be subject to arrest.”

The usage surprised many; “frozen zone” usually describes an area that’s officially off limits due to immediate risk of terrorist attack. Ground Zero was a frozen zone for weeks after 9/11, as Adam Ross wrote in Dispatches from Ground Zero:

Additional checkpoints on Houston, Canal, and Chambers Streets heightened the feel of an occupied, semi-militarized zone. Outsiders with no claim on residency were barred from entry. Even in the age of the three-thousand-dollar rental, downtowners had still imagined themselves in that “other country” which wry nineteenth-century cartographers had depicted as “le pays de boheme.” Suddenly, this was the least urbane of urban quarters, and on our most civil of streets and avenues a freakish assortment of paramilitary vehicles (bearing unfamiliar acronyms) held sway.

Before our story ran, the last reported “frozen zone” was the World Trade Center site during the 10th-anniversary 9/11 ceremonies, due to predictions of a possible al Queda assault that day. All weekend, some streets around Ground Zero were blocked off with metal barricades and large concrete blocks, and patroled by FBI bomb technicians and hazmat crews. Anyone living in the vicinity could be asked to show ID when leaving their homes, and vehicles were subject to inspection. The weekend passed safely, if uncomfortably, and some Lower Manhattan residents and workers said they supported the heightened cautionary measures in the face of a terror threat.

Slate’s Dave Weigel notes that “frozen zone” seemed an odd choice of words for the Zuccotti Park evacuation, given that protesters were unarmed and largely peaceful:

Correct me if I’m wrong, but I haven’t seen a “frozen zone” applied to a situation like this—an evacuation of protesters, none of whom (in New York) had been violent.

Kettling
The forceful coralling of demonstrators into an area cordoned off by police. Protesters may be given one choice of exit or totally barred from leaving. Kettling can last for hours, and in some cases protesters have reportedly been denied access to food, water, and toilets for the duration.

Kettling made an early appearance in the Occupy protests. In one of the movement’s first viral videos (below) we saw NYPD supervisor Anthony Bologna pepper-spray some young female protesters who’d been kettled by his subordinantes.

The tactic made international headlines during 2009’s G20 summit in London, when kettling was used by London police to corral up to 5,000 people at once. Several protesters claimed injuries and suffocation, and after a young woman held in a G20 police kettle claimed she experienced a miscarriage, an inquiry by the Independent Police Complaints Commission called for London’s Metropolitan Police force to rethink its crowd control methods, with the commission’s chair warning police to remember that they are “the servants not the masters” of the civilian population.

The most plausible suggestion is that the word is from German, in which Kessel is the everyday word for a kettle or similar vessel, such as a central-heating boiler (it is sometimes translated as the more evocative cauldron). The derived verb einkesseln (“to enkettle”) means to encircle or surround, principally in the military. This may come from an older sense of Kessel for a semi-circular ring of hunters driving game before them. The best-known example of the military sense is the Stalingrad Kessel of 1942, so called at the time by the German forces besieged in the Russian city.

Affirmative Obligation
At 4:35 in the video below, an Occupy protester demands that an officer identify himself and supply his badge number, and gets no response.

As Josh Holland reported at AlterNet, NYPD’s own rules state that officers must “give name and shield number to anyone requesting them.”

New York City’s Office of Administrative Trials and Hearings (‘OATH’) has issued a number of recent opinions that examine what this patrol guide procedure requires of officers. In essence, these cases have held that the patrol guide procedure imposes an ‘affirmative obligation‘ to ‘give name and shield number to anyone requesting them’; in other words, a demand for a name or badge number demands an ‘affirmative response.’

Affirmative obligation laws vary from state to state. In 2009, when Henry Louis Gates, Jr. was charged with disorderly conduct after breaking into his own home in Cambridge, Mass., he complained that his arresting officer repeatedly refused to state his name and badge number. Massachusetts law requires police officers to carry identification cards, to present them when requested, and to display their names and/or badge numbers on their uniform. Other states are silent on the issue, but many local departments have adopted laws similar the one in Massachusetts.

Confused about other Occupy terms? Send them to Tasneem Raja.