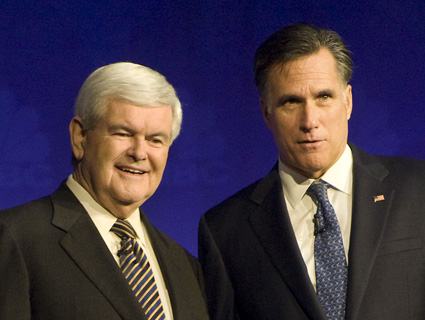 As Adam Serwer wrote after Tuesday night’s Republican presidential debate, Newt Gingrich shocked the world by coming out as a relative moderate on immigration policy. Gingrich argued that the United States should offer an exception for unauthorized immigrants who’ve lived here for years, and not deport them. Romney, whose front-runner status is under attack by a more-credible-seeming-by-the-day Gingrich, struck back quickly, stating that he would not back a policy that grants amnesty to undocumented immigrants, or one that offers them tuition aid or access to employment opportunities.

In a conference call on Wednesday, Reyes, Gonzalez, and Obama campaign spokesman Ben LaBolt accused Romney of flip-flopping on immigration policy over years. They cited his past support for a proposal from Sens. Ted Kennedy (D-Mass.) and John McCain (R-Ariz.) in 2005 that included a pathway to citizenship and beefed up border security. “In today’s political climate, he feels the need to oppose any kind of humane policy, no matter how it betrays the legacy of our nation,” Reyes said.

Romney has now effectively “placed himself in a camp that is deportation-only,” Gonzales said. “We know that is not a workable solution, not practical, not pragmatic. But most of all, it just doesn’t serve the economic interests of this country.” That, Gonzalez said, undermines Romney’s purported business acumen. “What he’s espousing sets us back as a nation,” Gonzales continued.

Gonzalez said that he fully expects Romney to come out in support of the harsh, Republican-backed immigration policies enacted in Arizona, Alabama, Utah, and Indiana. “Romney is somebody who once claimed to support comprehensive immigration reform,” said the Obama campaign’s LaBolt. “Now…he is the most rightwing presidential candidate in recent presidential history on this issue.”