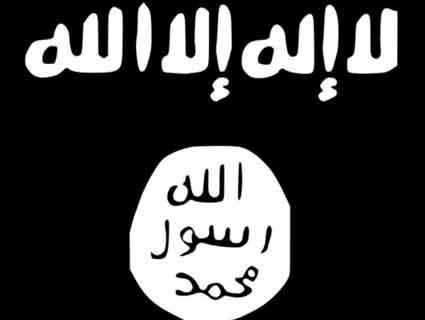 As I wrote last week, the appearance of a flag used by Al Qaeda in Iraq flying over a Benghazi courthouse has caused some anxiety over the extent of extremist sympathies among rebels in Libya.

A similar flag—which Brandeis researcher Aaron Zelin identifies as being associated with the Islamic State of Iraq, an umbrella organization of jihadists that includes al-Qaeda’s Iraqi franchise—has been popping up elsewhere in the region. This second flag has been described in some quarters as cause for concern and been greeted with outright hysteria in others. Earlier this morning, the Clarion Fund, a conservative organization where current Mitt Romney adviser and former Lebanese Forces member Walid Phares serves on the advisory board, sent out an email warning that Al Qaeda “had seized control of Libya.”

Writing at Foreign Policy, Will McCants, a former State Department counterterrorism adviser, says that the flag’s “appearance in Benghazi certainly raises questions about the sympathies of some within the movement that ousted Muammar al-Qaddafi, adding to widespread reports of fighters sympathetic to al Qaeda among the rebels.” But he cautions against reading too much into the use of the flag:

[T]he appearance of the flag in other Arab countries is not necessarily evidence of growing support for al Qaeda or terrorist group’s presence. It could just as easily be youth taking advantage of their newfound freedom to scare their elders, or repressed Salafis using the most shocking symbol possible to voice their anger in public. There is also an element of “Wish You Were Here” photography to many of the photos of the ISI’s flag being unfurled around the Arab world and posted in jihadi forums. This is not to say that the appearance of the flags, particularly in protests, should be ignored. But more corroborating evidence is needed before hitting the panic button.

Former Libyan Islamic Fighting Group member and rebel commander Abduljawad Bedeen also downplayed the presence of the black flags, telling Reuters that, “First of all, al-Qaeda doesn’t even have an official flag. And just because they’ve used a similar one doesn’t mean they have exclusive rights to it…If they were to send people here they would have a very, very weak presence…I don’t think the Libyan people would accept it.” Although the words of a former LIFG member could be dismissed as mere spin, Libya expert Ronald Bruce St John told me something similar last week.

In the spirit of avoiding the panic button, it’s worth recalling Osama bin Laden’s 2004 message in which he bragged that “All that we have to do is to send two mujahidin to the furthest point east to raise a piece of cloth on which is written al-Qaida, in order to make the generals race there to cause America to suffer human, economic, and political losses without their achieving for it anything of note other than some benefits for their private companies.”