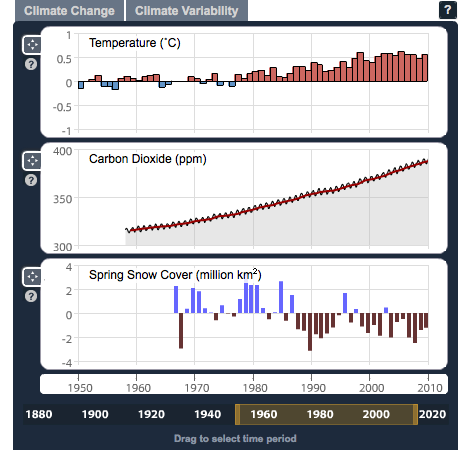 The Global Climate Dashboard, an interactive tool, via <a href="http://www.climate.gov/#climateWatch">NOAA Climate Services</a>.

A fascinating new paper today in Nature Climate Change on what exactly drives climate denial in the US. It’s not so much a case of people filtering information to meet their pre-existing notions of climate change.

Rather, it’s that a significant proportion of people (66.3 percent) believe—wrongly—that scientists disagree about climate change. It’s this misperception that drives climate skepticism.

Importantly, these findings are actionable: the myth of widespread disagreement among climate scientists over whether global warming is happening has little to no basis in truth, and it emerged, at least in part, as the result of a concerted effort to deceive the public.

So what’s to be done about it? The authors suggest the problem lies in crafting the message more positively:

Some studies suggest that repeating myths in efforts to debunk them—for example, stating ‘many people incorrectly believe that there is much disagreement among scientists about whether global warming is happening’—will backfire and strengthen the misperception in many minds; this occurs because information that is more familiar is deemed more likely to be true, and repeating the myth only makes it more familiar over time. Instead, efforts to ‘debias’ audiences should repeatedly assert the correct information—for example, ‘the vast majority of climate scientists agree that human-caused global warming is happening’—because repeated assertions, in time, become more familiar and therefore more likely to be deemed true. This strategy is consistent with the literature on public information campaigns, which has long emphasized the importance of the repetition of simple, clear messages to communicate effectively with the public.