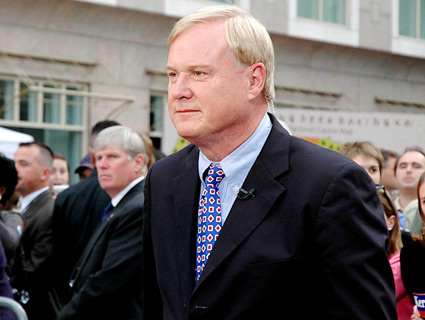 In his new book, Jack Kennedy: Elusive Hero, a graceful and elegiac contemplation of the young president who was killed before he could finish his own story, Hardball host Chris Matthews tells the tale of how Kennedy forged himself into a leader. Matthews set out to explore whether Kennedy was as fine a president as Matthews, then a young man on the verge of a long career in politics and media, had thought in the 1960s. The book is chock-full of poignant, harrowing, moving, and revealing moments. The account of Kennedy’s World War II heroism remains inspiring. Matthews’ recounting of Jack and brother Robert’s tough-as-nails backroom politics is gripping and instructive.

The book is a damn good read. (Interest declared: I work with Matthews at MSNBC, but, still, the book is a damn good read.) It’s a reminder that Matthews began his media career as a writer with a love of history, not a talker within a here-and-now medium. Historians who have long argued about Kennedy’s actions and legacy will no doubt question certain conclusions. Yet in launching the book, Matthews has smartly tied it to the present. In Time magazine this week, he has an intriguing and hard-hitting piece entitled “Five Things JFK Could Teach Obama.” (The article is behind a pay wall; you can get a taste of it here.)

When I was talking to Matthews about the book the other day, he excitedly pointed to what he believes is a telling anecdote that is likely to be overlooked by reviewers. When Kennedy was president, Matthews writes, he was able to act on his schoolboy’s love of heroes and history. He invited General Douglas MacArthur, then 82 years old, to his office for a visit. MacArthur, who had been relieved by President Truman in 1951, during the Korean War, for openly criticizing Truman’s limited-war strategy and calling for an invasion of China, had been a military hero—and Kennedy was a fan of military heroes.

In the White House, MacArthur pitched Kennedy an idea: Soldiers should be equipped with guns that could fire “atomic cartridges” that would “clear ten or fifteen yards in front” of them. MacArthur, now retired, told Kennedy, “If you could get me this type of atomic cartridge so that every soldier will have that, one hundred men could stop a division.” Kennedy played it straight, asking the old general, “Let’s say that the cartridge would be fired, let’s say, at some man, or group of men, coming across a field at a hundred and twenty yards. It would hit one man and what? You just explode in a puff?” In his way, Kennedy was noting that MacArthur was clueless about nuclear weapons. There could be no such thing as a small nuclear explosion that would take out a group of soldiers without destroying the troops firing this weapon.

This might have been merely a shrug-the-shoulders moment for Kennedy. But as Matthews views it, this exchange was one in a series of moments that led Kennedy to wonder whether “anachronistic thinking” infected the US military command. Kennedy, the junior World War II officer, realized that the advent of nuclear weaponry had changed the nature of warfare. But he would soon come to see, months later during the Cuban Missile Crisis, that not all his senior commanders, the men he once served under, understood that. And Kennedy, in a forward-looking manner, would go on to propose limits on nuclear arms testing as an initial step toward controlling the spread of these world-destroying weapons.

Matthews portrays Kennedy as a thinker, a fellow who from adolescence on was pondering his role in the world and the United States’ place in the great rush of history. Vision was important for Kennedy, whether or not he always delivered on it. “In searching for Jack Kennedy,” Matthews writes, “I found a fighting prince never free from pain, never far from trouble, never accepting the world he found, never wanting to be his father’s son. He was a far greater hero than he ever wished us to know.” Matthews rediscovered his hero. More important, the journey Matthews chronicles—JFK’s journey—is a fascinating American story with implications and consequences that reverberate five decades later.