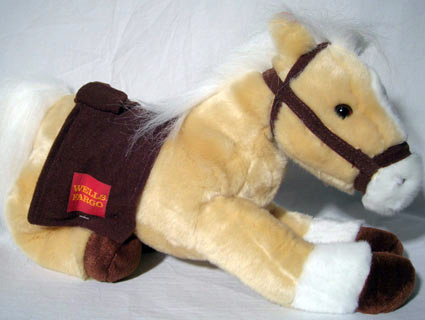 Also read our handy FAQ: How Do I Move My Money Out of a Big Bank?

Looking back on my 10 years with Wells Fargo, I’ll always remember the time that a banker gave my 18-month-old son a stuffed horse. After my son gleefully embraced it—”Horsie!”—I was told that taking it home would require signing up for a second checking account that I didn’t need. Not to worry, the friendly banker explained: He’d cancel the new account a few weeks later. I thanked him and went home feeling glad to know the guy.

The following month, my wife and I suddenly ran out of money, which seemed impossible given that I’d recently deposited a check. Wells Fargo’s hefty overdraft fees kicked in. I was freaking out, thinking somebody had gone on a shopping spree with our debit card number—until I realized that the check had somehow ended up in the still-active horsie account.

Enter Bank Transfer Day, the campaign to get people to move their money from large banks into small community credit unions. According to their main trade association, credit unions have signed up 650,000 new customers since the concept was announced on September 29—double their normal rate. But if credit unions really are so much better than big banks, why haven’t even more people switched over? Did the activists know something I didn’t—or were credit unions just peddling their own version of the free horsie?

“This is probably the worst bank on the planet,” a Yelp reviewer writes about the credit union near my apartment, which averages a mediocre three stars. But after reading more, I got a sense that not all credit unions are the same. The San Francisco Fire Credit Union, which supports firefighters but is open to all San Franciscans, averages a perfect five Yelp stars. One Yelper gushes, “I am in love.”

Hopping on my motorcycle, I ride the mile or so to Fire Credit Union headquarters, an airy, wood and marble space decorated with a Victorian-era fire carriage and a bunch of toy ladder trucks. Three people in front of me are waiting to open accounts.

One of them is David Johnson, a 30-year-old hairstylist who was compelled by Bank Transfer Day to crunch the numbers on his Wells Fargo merchant account. He discovered that switching to the credit union would save him at least $65 a month, and he can’t believe he hadn’t thought of it sooner. “It’s because we are kind of delivered into this system that our parents had,” he figures. “We kind of had this blind allegiance.”

My biggest concern about switching was always the lack of ATMs—the Fire Credit Union has only two, for example. But that doesn’t matter, it turns out, since the bank fully reimburses ATM fees charged by any bank in the world. “At the end of the day, we want you to have convenient access to your money,” a credit union employee in crisp khakis explains to the group. “Our system will automatically sweep for those transactions, and we refund you.”

Aleksey Chursin is happy to work at a credit union with no sales quotas: “We’re not pushing you products that you don’t need.”

Try as I may, I can’t find any other reason not to sign up. Free online bill pay: check. Fee-free overdraft protection linked to a credit card: check. Free online check deposits: check. Free banking on smart phones: check. Free change-sorting machine: check. The Fire Credit Union will even give you a personalized debit card. The khaki-clad employee pulls out his own card, which bears a picture of his golden retriever.

As far as customer service goes, the Fire Credit Union operates a 16-hour-a-day, seven-days-a-week hotline staffed by people who actually work there. (I later call and wait maybe two minutes before someone helps me.) Its president, Darren Herrmann, pledges to respond to all customer emails within 24 hours—though an employee tells me it might take a bit longer given that 1,000 people have signed up since Bank Transfer Day was announced (not bad for a credit union with 30,000 members).

As I fill out the paperwork, I start wondering how the credit union can afford to do all this. “Most of our profits, over 90 percent, are from loans,” explains banker Aleksey Chursin, whose desk sits underneath an oil painting of a horse-drawn fire engine. He suggests I check out a printout of the bank’s finances on display in the lobby, where I learn that the credit union has $644 million in liabilities and $700 million in equity. At any rate, its deposits are insured.

Chursin has been so busy signing up newcomers that he’s about to lose his voice. A coworker who sits next to him has skipped lunch today to serve walk-ins—34 so far today. Still, Chursin finds time to pull out his iPhone and show me photos of yesterday’s pumpkin-carving contest. He likes working here because there’s no quota for selling anything. “We’re not pushing you products that you don’t need,” he says. I don’t even have to write a check to open an account, but I decide to deposit $500 anyway.

The next morning I stop by my neighborhood Wells Fargo branch to ask why I shouldn’t move the rest of my money to the credit union. A stone-faced teller directs me to a Personal Banker who is sitting at his desk, sipping a Starbucks Grande. I’ll call him Andy because I don’t want to get him fired. He scans my debit card and tells me that I’m lucky to have an account originally opened in Texas with no minimum balance requirement. California Wells Fargo accounts don’t offer that. “You’re actually in good shape here.”

When I challenge a Wells Fargo banker to give me one good reason not to move my money over to a credit union, he really can’t.

I mention my recent trip to New York, where each time I withdrew cash, I was not only charged by the machine, but hit with a $5 fee from Wells Fargo, which doesn’t have any ATMs there. “The credit union will refund me all fees for that,” I tell him.

“Even the ones that the other bank charges you?” Andy asks.

“Unfortunately that’s something we can’t really compete—we don’t have an account that offers that,” he says apologetically. “If you are finding yourself in that situation a lot, I can see how that would be better for you.”

I tell him about other Wells Fargo fees—international transaction charges, fees for linking my checking and savings accounts—and then ask him why I should stay.

“To me, the advantage is we have not just more ATMs, but more locations,” he says. “But yeah, I can see the appeal of the credit union too, because they are not-for-profit, so, you know”—he laughs—”they’re able to do things like reimburse those fees, because they are not trying to make a profit off of each transaction. You know what I mean?”

Andy predicts that more customers will be complaining in a few weeks, when many previously free Wells Fargo accounts will suddenly cost $15 a month. Even so, he doesn’t think Occupy Wall Street’s critiques of the big banks are entirely fair. “Wells Fargo is the largest private employer in the Bay Area,” he says. “Wells Fargo is the largest corporate giver to charity in the Bay Area. So in terms of helping the local economy, helping local jobs—I mean, they gave me a job.”

Andy strikes me as a genuinely nice guy, so I don’t really have the heart to argue about whether Wells Fargo is a good corporate citizen. I don’t bring up the $85 million fine the bank paid this year for falsifying documents and pushing buyers into expensive loans they didn’t need. Or that Wells Fargo employed the unscrupulous foreclosure-mill baron David Stern. Or that Wells Fargo CEO John Stumpf earned an obscene $17.6 million in 2010, one year after the bank was bailed out by taxpayers, even as he was hoarding cash to gin up profits.

Andy helpfully points out that I probably won’t want to close my account until I get the chance to cancel my automatic bill pay service. Then, he glances at my account file and halfheartedly offers me a zero-interest credit card.

Tempting, but no thanks.